Funnel-web spider venom contains powerful neurotoxins that instantly paralyze prey (usually insects). Millions of years ago, however, this potent poison was just a hormone that helped ancestors of these spiders regulate sugar metabolism, similar to the role of insulin in humans. Surprisingly, this hormone's weaponization--described on June 11 in the journal Structure--occurred in arachnids as well as centipedes, but in different ways.

Researchers at the University of Queensland in Australia and Lewis & Clark College in Portland, Oregon, made the connection while screening for similarities between the venom proteins and other molecules. They found that even though the toxins and the hormone had different genetic sequences, they had similar molecular shapes.

"If you take the sequence of the spider toxin and you do a BLAST search, the hormone is so different now that you don't pull it out," said study senior author Glenn King, a biochemist and structural biologist at the University of Queensland's Institute for Molecular Bioscience. "But when we did a structural search and it pulled up the hormone, that's what really surprised us--the sequence didn't tell us where the toxins evolved from, but the structure did pretty clearly."

Knowing a toxin's past is useful for the development of new pharmaceuticals and bioinsecticides. Venom molecules are extremely complex (some are made up of over 3,000 peptides), so once the structure is known, researchers such as King can more easily "evolve" a toxin by making changes to its sequence to add or remove functions. The products of such experiments have yielded blood pressure drugs, analgesics, and bioinsecticides--all organically based and so naturally break down.

King's group found that centipede venom has more subtle alterations of the hormone that make it more stable and therefore a better engineering template. He is collaborating with biological and chemical engineer Jennifer Cochran at Stanford University to conduct these in vitro evolution experiments on the spider and centipede toxins. The goal is to take away their toxicity and find opportunities to use them to solve agricultural or medical problems.

One question that remains is how a body protein evolved into a weapon. King hypothesizes that the hormone may have been recruited into an ancient arthropod's venom to cause adverse effects in prey. "If a hormone does something bad to prey, you might recruit it into the venom and make lots of it," he says. "That's the starting point and it can then evolve to become more potent."

In an example of convergent evolution, centipedes and spider neurotoxins used different strategies to turn the hormone into a potent neurotoxin. Both arthropods also have multiple versions of the venom molecules; a sign that they have been successful enough for new functions to be added on over evolutionary time.

Structure, published by Cell Press, is a monthly journal that aims to publish papers of exceptional interest in the field of structural biology. It strives to be essential reading for structural biologists, as well as biologists and biochemists that are interested in macromolecular structure and function. For more information, please visit http://www.cell.com/structure. To receive media alerts for Structure or other Cell Press journals, please contact press@cell.com. 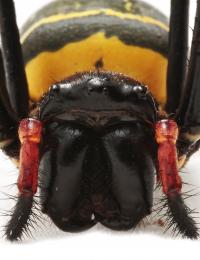