A team led at NASA's Goddard Space Flight Center in Greenbelt, Md., has developed an instrument capable of observing ocean color during normal sunlight conditions and under moonlight — a first-ever capability that will allow scientists to monitor the health and chemistry of the planet's oceans literally around the clock.

The prototype Ocean Color Underwater Low Light Advanced Radiometer (OCULLAR) has shown in field testing that it can measure ocean color under low-light conditions across multiple wavelength bands, from the ultraviolet to the near-infrared. In contrast, current remote-sensing instruments can obtain measurements — based on electromagnetic energy emitted by the sun, transmitted through the atmosphere, reflected off Earth's surface, or upwelled from water masses — only during daylight hours, said Principal Investigator Stan Hooker.

Of particular interest to scientists studying ocean color is phytoplankton, the microscopic ocean plants that form the base of the oceanic food web. These tiny plants use sunlight and carbon dioxide to produce organic carbon. This process, called photosynthesis, is possible because plants contain chlorophyll, green-colored compounds that trap the energy from sunlight. Because different types of phytoplankton contain different kinds of chlorophyll, measuring the color of a particular area allows scientists to estimate the amount and general type of phytoplankton there. Since phytoplankton also depend on specific conditions for growth, they frequently become the first to be affected by pollution or some other change in their environment.

"Ocean color is what we see and is a big part of understanding the ocean's diversity," Hooker explained. "You can figure out what's happening in the ocean by looking at the different colors or wavelengths, which then are used to determine what constituents in the water are creating that color."

Until now, however, obtaining these measurements was limited to daylight hours and only during the spring, summer and fall months in the polar regions — a problem Hooker sought to correct with OCULLAR. Inspired in part by NASA "black marble" imagery, which showed Earth at night, Hooker thought, "with the right technology, we could look at the planet at night."

The need, he said, was compelling. "The light levels are so low, you literally lose hours of data around the world and, at the polar areas, an entire season of data."

A Marriage of Two Detector Systems

The team, which also includes Charles Booth and John Morrow, both scientists with Biospherical Instruments Inc. in San Diego, created the new capability by pairing two light-measuring, but distinctively different, detector systems: a miniature and ruggedized photomultiplier tube (PMT) with an existing silicon photodetector microradiometer, with an embedded microprocessor. When commercialized, Hooker said hybrid OCULLAR instruments would be equipped with seven PMTs paired with seven silicon photodetectors. An eighth photodetector will measure a wavelength useful to ocean color, but difficult to measure with a PMT.

Its functioning is straightforward. When photons — the fundamental particles of light — strike a silicon detector, the photons cause a response that is measured as voltage. When fewer and fewer photons are detected, as occurs under low-light conditions, the detector reports a smaller and smaller voltage. As a result, the microradiometer's computer "brain" instructs the second detector system — the photomultiplier tube — to swing into action. As its name implies, the PMT multiplies the effect of the photons that enter the system to create a cascade that OCULLAR can easily sense. The photomultiplier capability is not activated under normal sunlight conditions.

Considerably smaller than older legacy ocean-color instruments, which could be as large as an office trash can, an OCULLAR instrument will measure three-and-a-half inches in diameter and about a foot in length — making it compact enough for use on a range of platforms.

"We thought we could pair a photomultiplier tube with a smart silicon photodetector, which we equipped with a computer brain, but we had never done it before," Hooker said. "So we used R&D funds to test that hypothesis. We were completely successful."

Leading the Way to Commercialization

During a field campaign measuring nighttime light off the coast of San Diego — a site purposively selected because future NASA Earth remote-sensing missions likely will concentrate on coastal observations — the team proved the prototype's ruggedness and high sensitivity over a large range of light. "In fact, we were more successful than we thought we would be," Hooker added.

"A human can see objects under full sunlight and barely see objects under a moonless night," explained Hooker. "The illumination for the former is about a billion times the illumination of the latter. The value can be represented as 10 raised to the ninth power, or nine decades of dynamic range. OCULLAR sensors have 14 decades of linear dynamic range, with the added responsivity at the low end of illumination," he added. "So, OCULLAR sensors have five more decades of response to low light than the human eye."

The successful OCULLAR demonstration leads the way to anticipated commercialization and creates a new capability for oceanographers, climate scientists, and others interested in quantifying, understanding, and monitoring the biological productivity of oceans, coastal areas, and inland waters, Hooker said.

The next step is to develop a flight-ready instrument that could be flown first at low altitude and then ultimately on a high-altitude research aircraft, such as NASA's unmanned Global Hawk. The OCULLAR team wants to commercialize the new technology as a low-cost instrument. The idea is to dispatch as many of these instruments as possible to obtain global ocean observations. "We want to start on the ground and keep going upward," Hooker said. Ultimately, the team wants to fly the technology in space.

"We're building something that sees better than the human eye," Hooker said, adding that the instrument could measure conditions under twilight, moonlight, and even beneath sea ice. "And that's quite an accomplishment." 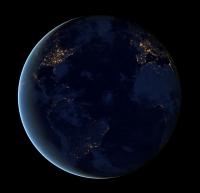