Only 15% of patients with squamous cell lung cancer – the second most common lung cancer – survive five years past diagnosis. Little is understood about how the deadly disease arises, preventing development of targeted therapies that could serve as a second line of defense once standard chemotherapy regimens fail.

"This is the most exciting thing we've done," said senior author Trudy Oliver, Ph.D., an assistant professor of oncological sciences at the University of Utah and Huntsman Cancer Institute investigator. "Now that we have a model it unleashes so many questions we can ask to gain a better understanding of the disease."

By definition, tumors are groups of cells that are out of control. As a result, they acquire mutations, only some of which drive properties – such as excess growth and motility - that make cells cancerous. The trick for developing targeted therapies is to distinguish the "driver" from "passenger" mutations that are merely along for the ride.

Call it guilt by association, but Oliver's team honed in on drivers of squamous cell carcinoma (SCC) of the lung by poring through documented gene abnormalities found in human SCCs. Sox2 was designated a prime candidate based on its overexpression in 60-90% of SCCs, and a frequent early appearance during tumor formation, suggesting it could be an initiator of cancer. Tumor suppressor genes were also candidates, including Lkb1, which is mutated in 5-19% of SCCs.

While disruption of either gene alone failed to trigger cancer, combining overexpression of sox2 in the lung with loss of lkb1 led to frequent development of lung SCC in mice.

"A pathologist looking under the microscope at our tumors would not know it's from the mouse," said Oliver. "They visually look like human tumors, and then when we stain them for biomarkers of the human disease, our mouse tumors light up for those markers."

Unlike most previously existing lung SCC mouse models that develop multiple tumor types, the sox2/lkb1 model generates SCC exclusively. Combine this with the fact that it was created based on patient data makes the model clinically relevant, and well poised for testing novel targeted therapies.

"Beyond lung cancer, findings from this model may have important clinical implications for other squamous or Sox2-driven malignancies such as small cell lung cancer, and brain, esophageal, and oral cancers," said Anandaroop Mukhopadhyay, Ph.D., Huntsman Cancer Institute scientist and lead author on the paper.

While there are no known drugs that directly target either Sox2 or Lkb1, there are existing therapies that interfere with biochemical pathways that are thought to be activated by these genes. What's more, the scientists found that these pathways, Jak-Stat and mTOR, were activated in tumors in the new mouse model. These findings suggest that the drugs that block these pathways, STAT3 and mTOR inhibitors, are good candidates for working as lung SCC targeted therapies.

"These are pathways that had not been previously explored for the treatment of squamous tumors because we didn't realize they were important," Oliver explained. "That gives us direction for testing the efficacy of drugs aimed at these pathways."

About Huntsman Cancer Institute at the University of Utah:

Huntsman Cancer Institute (HCI) is one of the world's top academic research and cancer treatment centers. HCI manages the Utah Population Database - the largest genetic database in the world, with more than 16 million records linked to genealogies, health records, and vital statistics. Using this data, HCI researchers have identified cancer-causing genes, including the genes responsible for melanoma, colon and breast cancer, and paraganglioma. HCI is a member of the National Comprehensive Cancer Network (a 25-member alliance of the world's leading cancer centers) and is a National Cancer Institute-Designated Cancer Center. HCI treats patients with all forms of cancer and operates several high-risk clinics that focus on melanoma and breast, colon, and pancreas cancers. The HCI Cancer Learning Center for patient and public education contains one of the nation's largest collections of cancer-related publications. The institute is named after Jon M. Huntsman, Sr., a Utah philanthropist, industrialist, and cancer survivor. 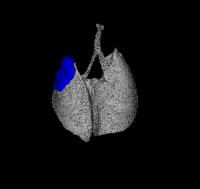