Erythritol has many great advantages: it does not make you fat, it does not cause tooth decay, it has no effect on the blood sugar and, unlike other sweeteners, it does not have a laxative effect. In Asia it is already widely used and it is becoming more and more common in other parts of the world too. Up until now, erythritol could only be produced with the help of special kinds of yeast in highly concentrated molasses. At the TU Vienna, a method has now been developed to produce the sweetener from ordinary straw with the help of a mould fungus. The experiments have been a big success, and now the procedure will be optimized for industry.

From Straw via Sugar to Erythritol

Straw is often considered to be worthless and is therfore burnt, but it can be a precious resource. Some of its chemical components can be made into valuable products. First, the finely chopped straw has to be "opened up": with the help of solvents, the cell walls are broken, the lignin is dissolved away. The remaining xylan and cellulose are then processed further.

"Usually the straw has to be treated with expensive enzymes to break it down into sugar", says Professor Robert Mach (Vienna University of Technology). "In highly concentrated molasses, special strains of yeast can then turn the sugar into erythritol, if they are placed under extreme osmotic stress."

The enzymes opening up the straw can be obtained with the help of the mould fungus Trichoderma reesei. This kind of mould also plays the leading role in the new production process developed at the Vienna University of Technology.

Two big advantages have been achieved by genetically modifying the fungus: the process of obtaining the enzymes from mould cultures and chemically cleaning them used to be cumbersome – now the improved strain can be directly applied to the straw. Secondly, the mould can now produce erythritol directly from the straw. The intermediate step of producing molasses is not necessary any more and no yeast has to be used.

"We knew that the mould fungus Trichoderma reesei is in principle capable of producing erythritol, but usually only in tiny quantities", says Robert Mach. "By genetically modifying it, we managed to stimulate the production of an enzyme, which enables the large-scale production of the sweetener."

Erythritol is about 70 to 80 percent as sweet as sugar. Today, 23000 tons of erythritol are produced every year. This quantity could increase considerably if the trend of switching to erythritol spreads from Asia to Europe and the US. Astrid Mach-Aigner and Robert Mach from the Vienna University of Technology have already patented the new production process, together with the company ANNIKKI. "We have proven that the new production method works", says Robert Mach. "Now we want to improve it together with our industry partners so that it can be used for large-scale production." 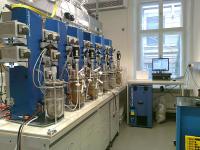