Scientists have developed the first cell controlled by a synthetic genome. They now hope to use this method to probe the basic machinery of life and to engineer bacteria specially designed to solve environmental or energy problems.

The study will be published online by the journal Science, at the Science Express website, on Thursday, 20 May. Science is published by AAAS, the nonprofit science society.

The research team, led by Craig Venter of the J. Craig Venter Institute, has already chemically synthesized a bacterial genome, and it has transplanted the genome of one bacterium to another. Now, the scientists have put both methods together, to create what they call a "synthetic cell," although only its genome is synthetic.

"This is the first synthetic cell that's been made, and we call it synthetic because the cell is totally derived from a synthetic chromosome, made with four bottles of chemicals on a chemical synthesizer, starting with information in a computer," said Venter.

"This becomes a very powerful tool for trying to design what we want biology to do. We have a wide range of applications [in mind]," he said.

For example, the researchers are planning to design algae that can capture carbon dioxide and make new hydrocarbons that could go into refineries. They are also working on ways to speed up vaccine production. Making new chemicals or food ingredients and cleaning up water are other possible benefits, according to Venter.

In the Science study, the researchers synthesized the genome of the bacterium M. mycoides and added DNA sequences that "watermark" the genome to distinguish it from a natural one.

Because current machines can only assemble relatively short strings of DNA letters at a time, the researchers inserted the shorter sequences into yeast, whose DNA-repair enzymes linked the strings together. They then transferred the medium-sized strings into E. coli and back into yeast. After three rounds of assembly, the researchers had produced a genome over a million base pairs long.

The scientists then transplanted the synthetic M. mycoides genome into another type of bacteria, Mycoplasm capricolum. The new genome "booted up" the recipient cells. Although fourteen genes were deleted or disrupted in the transplant bacteria, they still looked like normal M. mycoides bacteria and produced only M. mycoides proteins, the authors report.

"This is an important step we think, both scientifically and philosophically. It's certainly changed my views of the definitions of life and how life works," Venter said.

Acknowledging the ethical discussion about synthetic biology research, Venter explained that his team asked for a bioethical review in the late 1990s and has participated in variety of discussions on the topic.

"I think this is the first incidence in science where the extensive bioethical review took place before the experiments were done. It's part of an ongoing process that we've been driving, trying to make sure that the science proceeds in an ethical fashion, that we're being thoughtful about what we do and looking forward to the implications to the future," he said.

This research paper and a related article by Science's News team are available here.

The American Association for the Advancement of Science (AAAS) is the world's largest general scientific society and publisher of the journals, Science (www.sciencemag.org), Science Signaling (www.sciencesignaling.org), and Science Translational Medicine (www.sciencetranslationalmedicine.org). AAAS was founded in 1848, and serves 262 affiliated societies and academies of science, reaching 10 million individuals. Science has the largest paid circulation of any peer-reviewed general science journal in the world, with an estimated total readership of 1 million. The non-profit AAAS (www.aaas.org) is open to all and fulfills its mission to "advance science and serve society" through initiatives in science policy; international programs; science education; and more. For the latest research news, log onto EurekAlert!, www.eurekalert.org, the premier science-news Web site, a service of AAAS.

Scientists 'boot up' a bacterial cell with a synthetic genome 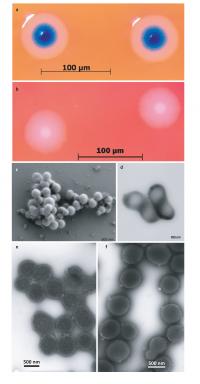