A new peer-reviewed data paper offers a comprehensive, open-access collection of georeferenced biological information about the Antarctic macrobenthic communities. The term macrobenthic refers to the visible-for-the-eye organisms that live near or on the sea bottom such as echinoderms, sponges, ascidians, crustaceans. The paper will help in coordinating biodiversity research and conservation activities on species living near the ocean bottom of the Antarctic.

The data paper "Antarctic macrobenthic communities: A compilation of circumpolar information", published in the open access journal Nature Conservation, describes data from approximately 90 different expeditions in the region since 1956 that have now been made openly available under a CC-By license. The paper provides unique georeferenced biological basic information for the planning of future coordinated research activities, for example those under the umbrella of the biology program Antarctic Thresholds – Ecosystem Resilience and Adaptation (AnT-ERA) of the Scientific Committee on Antarctic Research (SCAR). The information collected could be also beneficial for current conservation priorities such as the planning of Marine Protected Areas (MPAs) by the Commission for the Conservation of Antarctic Marine Living Resources (CCAMLR).

The expeditions were organised by several famous explorers of the Antarctic. The area covered by the paper consists of almost the entire Southern Ocean, including sites covered by a single ice-shelf. The vast majority of information is from shelf areas around the continent at water depth shallower than 800m. The information from the different sources is then attributed to the classified macrobenthic assemblages. The results are made publicly available via the "Antarctic Biodiversity Facility" (data.biodiversity.aq).

A specific feature of this paper is that the manuscript was automatically generated from the Integrated Publishing Toolkit of the Antarctic Node of the Global Biodiversity Information Facility (AntaBIF IPT) and then submitted to the journal Nature Conservation through a novel workflow developed by GBIF and Pensoft Publishers. (see previous press release). Data are made freely available through the AntaBIF IPT, and sea-bed images of 214 localities through the data repository for geoscience and environmental data, PANGAEA- Data Publisher for Earth and Environmental Science (sample: http://doi.pangaea.de/10.1594/PANGAEA.198682).

Speaking from on board the research vessel 'Polarstern', the paper's lead author Prof. Julian Gutt of the Alfred Wegener Institute Helmholtz Centre for Polar and Marine Research, Germany commented:

"The most important achievement of this paper is that data collected over many years and by various institutions are now not only freely available for anyone to download and use, but also properly described to facilitate future work in re-using the data. The Data Paper concept is certainly a great approach that multiplies the effect of funds and efforts spent by generations of scientists."

The data will also be used for a comprehensive Biogeography Atlas of the Southern Ocean project to be released during the XI SCAR Biology Symposium in Barcelona July 2013.

What is a Data Paper?

A Data Paper is a scholarly journal publication whose primary purpose is to describe a dataset or a group of datasets, rather than to report a research investigation. As such, it contains facts about data, not hypotheses and arguments in support of those hypotheses based upon data, as found in a conventional research article. Its purposes are three-fold:

to provide a citable journal publication that brings scholarly credit to data publishers;
to describe the data in a structured human-readable form;
to bring the existence of the data to the attention of the scholarly community. 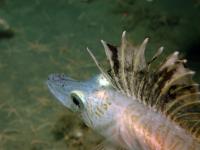