New research indicates older species of coral have more of what it takes to survive a warming and increasingly polluted climate, according to biologists from the University of Texas at Arlington and the University of Puerto Rico – Mayagüez.

The researchers examined 140 samples of 14 species of Caribbean corals for a study published by the open-access journal PLOS ONE on Aug. 18.

Jorge H. Pinzón C., a postdoctoral researcher in the UT Arlington Department of Biology, is lead author on the study. Co-authors are Laura Mydlarz, UT Arlington associate professor of biology, Joshuah Beach-Letendre, a former masters student in the Mydlarz lab, and Ernesto Weil, professor in marine sciences at the University of Puerto Rico-Mayagüez. The paper is called "Relationship between phylogeny and immunity suggests older Caribbean coral lineages are more resistant to disease." It is available here: http://dx.plos.org/10.1371/journal.pone.0104787.

The team looked at the number of diseases affecting each species over the years and tested the species' base-level immunity in the lab to determine whether a "phylogenic signal" existed. A phylogenetic signal is when organisms in closely related species have characteristics that are more similar to each other than they are to more distant species.

"Species that have been around over longer periods of time have been exposed to more environmental and biological stressors, and they have survived, so it seems logical to expect that they would have better base immunity or be better adapted to respond to new stresses" said Weil.

Mydlarz added: "Our interest is in making sense of these disease patterns. The bottom line is, the older coral species are doing better."

The National Science Foundation funds both Weil and Mydlarz and Weil also received support from the National Oceanic and Atmospheric Administration.

Coral reefs around the world are vital to ocean diversity and health, as well as to millions of families and many industries such as fishing and tourism that benefit from the ecological services they provide. But, their health is threatened by pollution, overfishing and climate change. These stressors have weakened coral defenses and made some species more susceptible to diseases, such as white plague and yellow band diseases.

Some of the oldest corals in the study, such as the Porites astreoides or "mustard hill coral," have been around for more than 200 million years while others diverged to become a new species as recently as 7 million years ago. For the most part, older corals exhibited fewer diseases and better immunity. Researchers found, for example, that older corals can kill up to 41 percent of bacterial growth versus just 14.6 percent in newer species.

Pinzón, who is a recipient of the NSF's U.S. Ocean Science Postdoctoral Research Fellowship, said that the pattern that emerged from the team's work gives scientists "a starting point to predict which corals could be more susceptible to disease."

The paper pinpoints two factors – the inhibition of bacterial growth and melanin concentration – that were higher in older corals and likely play an important role in disease resistance. Newer species showed higher levels of antioxidants, although, such high levels in antioxidants could indicate newer corals are under constant state of stress that might compromise their immune system and other biological functions.

Mydlarz said her team would continue looking for patterns in coral disease and their explanations. The answers they find could help marine biologists chart the future of coral reefs.

"We don't think coral reefs will go away, but they will change and that change could affect everything else that depends on the reef ecosystem," she said.

The University of Texas at Arlington is a comprehensive research institution and the second largest institution in The University of Texas System. The Chronicle of Higher Education ranked UT Arlington as the seventh fastest-growing public research university in 2013. U.S. News & World Report ranks UT Arlington fifth in the nation for undergraduate diversity. Visit http://www.uta.edu to learn more. Follow #UTAdna on Twitter. 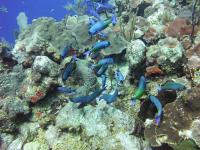 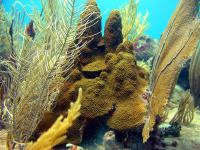