(March 4, 2012) Millbrook, N.Y. – Past disturbances, such as logging, can obscure the effects of climate change on forest ecosystems. So reports a study just published in the Proceedings of the National Academy of Sciences. The paper, exploring nitrogen dynamics, found that untangling climate impacts from other factors can be difficult, even when scientists have access to decades of data on a forest's environmental conditions.

Co-author Dr. Gene E. Likens of the Cary Institute comments, "Understanding how climate change is shaping forests is critical. Our paper underscores the complexity of forest ecosystems, the legacy left by disturbance, and the difficulty in isolating climate impacts from the legacies of past disturbances."

The Hubbard Brook Experimental Forest, located in the White Mountains of New Hampshire, is home to the longest, most complete record of watershed-ecosystem dynamics in the world. Its study sites have been measuring the environmental pulse of the forest for nearly half a century.

Because nitrogen is essential to plant growth and a potential pollutant in water, Hubbard Brook scientists have paid close attention to nitrate draining from the watershed. Their long-term records show that nitrate concentrations in streams are at a 46-year low, and ecosystem-wide loss of nitrate from the watershed has decreased by 90%.

The paper's authors, including two scientists from the Cary Institute and several from Princeton University, sought to reveal what was driving this shift in nitrogen dynamics. Among the variables explored were reductions in airborne nitrogen pollution, climate change (species shifts, warming soils, a longer growing season, and snowmelt changes) and landscape-level disturbance (logging, hurricanes).

A decline in airborne nitrogen pollution was not found, and the replacement of ~25% of the forest's sugar maples with American beech, a slow-decomposing species, accounted for only a modest reduction in nitrate export. Most surprisingly, despite five decades of warming, the authors did not find that a longer growing season resulted in increased vegetation growth and subsequent nitrogen demand.

They did identify a relationship between warmer winters, a decline in large snowmelt events, and a decrease in nitrate export. When nitrate has time to linger in the soil, it can be taken up by plants and microbes. And increases in soil temperature, combined with a shift in soil water flow patterns, explained about 40% of the nitrate decline.

But historical disturbance—not climate change—was the driving factor behind the shift in nitrogen dynamics seen at Hubbard Brook. Using hundreds of modeling scenarios, the authors found that 50-60% of the decrease in nitrogen export could be explained by extensive timbering that occurred in the White Mountains in the early twentieth century. Logging activity had a large influence on the amount of nitrogen in soils that persisted for decades.

The counterintuitive finding that nitrate export dropped when forest growth was decelerating underscores the legacy that landscape-scale disturbances leave on the forest nitrogen cycle. First author Susana Bernal of Princeton University comments, "Recognizing how present-day concerns such as climate change interact with historical patterns in ecosystems marks a major challenge in gauging the health of the planet."

With Likens concluding, "As far as the forest nitrogen cycle is concerned, we can't assess climate impacts, or determine accurate baselines for predictive models, without accounting for past disturbances."

The Cary Institute of Ecosystem Studies is a private, not-for-profit environmental research and education organization in Millbrook, N.Y. For more than twenty-five years, Cary Institute scientists have been investigating the complex interactions that govern the natural world. Their objective findings lead to more effective policy decisions and increased environmental literacy. Focal areas include air and water pollution, climate change, invasive species, and the ecological dimensions of infectious disease. Learn more at www.caryinstitute.org 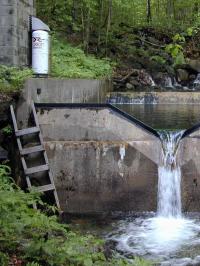