One of the rarest birds in the western hemisphere, the Bahama Nuthatch, has been rediscovered by research teams searching the island of Grand Bahama.

The finding is particularly significant because the species had been feared extinct following the catastrophic damage caused by Hurricane Matthew in 2016, and had not been found in subsequent searches.

But it is feared that there could only be two left - placing the species on the verge of extinction and certainly among the world's most critically endangered birds.

The Bahama Nuthatch is an endangered species, only known from a small area of native pine forest on Grand Bahama Island, which lies approximately 100 miles off Palm Beach, Florida.

University of East Anglia masters students Matthew Gardner and David Pereira set out on a three-month expedition to find this and other endemic Caribbean pine forest bird species.

They made their way through dense forest with thick 'poisonwood' understorey - the layer of vegetation growing beneath the main forest canopy - in what is thought to be one of the most exhaustive searches of the island.

They worked in partnership with Nigel Collar and David Wege from Birdlife International and the Bahamas National Trust, the organisation which works to protect the habitats and species of The Bahama Islands.

Meanwhile a second team of Bahamian students, led by Zeko McKenzie of the University of The Bahamas-North and supported by the American Bird Conservancy, also searched for the bird.

The Bahama Nuthatch has a long bill, a distinctive high-pitched squeaky call, and nests only in mature pine trees. There had been a sharp decline in its population crashing from an estimated 1,800 in 2004 to just 23 being seen in a survey in 2007. The decline likely began in the 1950s due to habitat loss due to timber removal, and more recently due to hurricane damage, storm surges having killed large areas native forest.

Both teams made Nuthatch sightings in May, and the UEA team were lucky enough to capture the elusive bird on film.

"Our researchers looked for the bird across 464 survey points in 34,000 hectares of pine forest. It must have been like looking for a needle in a hay stack. They played out a recording of the bird's distinctive call in order to attract it.

"As well as searching for the elusive bird, they also collected environmental data to better understand its habitat preferences and surveyed the extent of hurricane and fire damage," she added."

Matthew Gardner said: "We were the first to undertake such an exhaustive search through 700km of forest on foot.

"We had been scouring the forest for about six weeks, and had almost lost hope. At that point we'd walked about 400km. Then, I suddenly heard its distinctive call and saw the unmistakable shape of a Nuthatch descending towards me. I shouted with joy, I was ecstatic!"

The UEA team made six Nuthatch sightings in total, and McKenzie's team independently made five sightings, using different methods, in the same small area of forest - including a sighting of what they believe to be two birds together.

Mr Gardner said: "During three months of intensive searching we made six Bahama Nuthatch sightings. Our search was extremely thorough but we never saw two birds together, so we had thought there might only be one left in existence."

"The other team have reported seeing two together so that is promising. However, these findings place the species on the verge of extinction and certainly amongst the world's most critically endangered birds."

"We also don't know the sex of the birds. In many cases when birds dwindle to such small numbers, any remaining birds are usually male."

"The photographs clearly show this distinctive species and cannot be anything else" said Michael Parr, President of American Bird Conservancy and a UEA alumnus.

The Nuthatch was spotted in a small area known as Lucaya Estates. During the research project, birds were seen and heard in three distinct but nearby locations within this area.

Researcher Zeko McKenzie said: "Although the Bahama Nuthatch has declined precipitously, we are encouraged by the engagement of conservation scientists who are now looking for ways to save and recover the species."

The UEA team however are less optimistic as the exact drivers of the precipitous decline of the bird are still unclear.

Dr Diana Bell said: "Sadly, we think that the chances of bringing this bird back from the brink of extinction are very slim - due to the very low numbers left, and because we are not sure of the precise drivers for its decline.

"But it is still absolutely crucial that conservation efforts in the native Caribbean pine forest do not lapse as it is such an important habitat for other endemic birds including the Bahama Swallow, Bahama Warbler and Bahama Yellowthroat.

"The habitat is also incredibly important for North American migrants including the Kirtlands Warbler," she added.

"Their work has taken them across the length and breadth of the island in what was likely the most in depth search to be conducted. Their research, which was inclusive of bird and habitat surveys, has helped to answer questions that some residents have been asking for some time."

"Sadly, we realize now that we are faced with a very dire situation regarding the Bahama Nuthatch. We wouldn't have realized the extent of the issue without the persistent efforts of David and Matthew."

1/ For more information or to request an interview, please contact the UEA communications office on +44 (0)1603 593496 or email communications@uea.ac.uk.

4/ The University of East Anglia (UEA) is a UK Top 15 university. Known for its world-leading research and outstanding student experience, it was awarded Gold in the Teaching Excellence Framework. UEA is a leading member of Norwich Research Park, one of Europe's biggest concentrations of researchers in the fields of environment, health and plant science. http://www.uea.ac.uk

5/ The Bahamas National Trust is a non-profit organisation in that manages the country's national parks with a mission to conserve and protect the natural resources of The Bahamas, through stewardship and education for present and future generations. http://www.bnt.bs 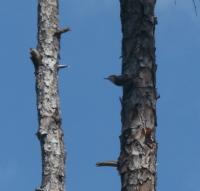 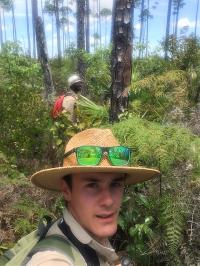 UEA Researchers on the Trail of the Elusive Bahama Nuthatch