With the tropical storm season in the Atlantic Ocean underway and already well into the Greek alphabet for naming, better storm track prediction has allowed timely evacuations and preparations. However, the formation and intensification of these storms remains challenging to predict, according to an international team of researchers who are studying the origin of tropical cyclones.

"There are critical questions around the formation and intensification of hurricanes that makes forecasting them extremely difficult," said James H. Ruppert Jr., assistant research professor of meteorology and atmospheric science, Penn State. "We don't yet have sufficient understanding of the processes that drive storm formation."

Tropical depressions are the weak precursors to intense hurricanes, usually identifiable as a disorganized cluster of clouds in a weak low-pressure area, according to Ruppert.

"The tropical depression stage is usually the first time that forecasters are able to identify and start tracking a storm," he said.

Environmental conditions usually provide a narrow window in which these depressions can form into intense tropical cyclones.

"Understanding the transition from this depression stage to an intensifying hurricane is what we are after," said Ruppert.

The researchers found that infrared radiative feedback from clouds creates a localized greenhouse effect that traps heat in the area of the tropical depression. Deep clouds that are heavily laden with water droplets and ice crystals trap outgoing infrared radiation and warm the atmosphere. This local warming causes lifting motion in the storm, which helps fully saturate the atmosphere and increase inward flowing winds near the ocean's surface. As long as the storm is more than a few degrees above or below the equator, the Coriolis Effect causes these inward flowing winds to form a circulation near the surface. This circulation then intensifies with the help of surface evaporation and eventually forms a central eye, taking on the classic appearance of an intense tropical cyclone.

The researchers found that the localized warming created by the cloud greenhouse effect helped accelerate the formation of both Haiyan and Maria. When they removed the effect in the model simulation, the storms either formed more slowly or not at all. The researchers argue that the cloud greenhouse effect is therefore likely instrumental in the formation of many tropical storm events. They report their results today (Oct. 26) in the Proceedings of the National Academy of Sciences.

"Our ultimate goal is to better forecast tropical cyclones, and it currently remains very hard to forecast storm formation," said Ruppert. "Storm track forecasting has improved immensely in recent decades. Large-scale winds primarily control storm tracks and our ability to both measure and predict these winds has improved greatly, allowing for major progress in storm track prediction. The small-scale processes that govern storm formation and intensification in the first place -- that is where our understanding and ability to observe are still really challenged."

Also working on this project were Allison A. Wing, assistant professor in the Department of Earth, Ocean and Atmospheric Science, Florida State University; Xiaodong Tang, associate professor, School of Atmospheric Sciences, Nanjing University, China; and Erika L. Duran, a researcher at the University of Alabama in Huntsville and the NASA Short-term Prediction Research and Transition Center.

Greenhouse effect of clouds instrumental in origin of tropical storms 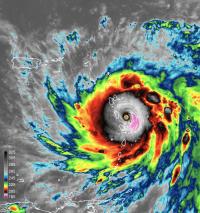