Of all the different types of cancer known, a subtype of pancreatic cancer called pancreatic ductal adenocarcinoma (PDAC) is among the most aggressive and deadly. This disease begins in the cells that make up certain small ducts in the pancreas and progresses silently, usually causing no symptoms until advanced tumors actually obstruct these ducts or spread to other places. PDAC is not only difficult to diagnose, but also very unresponsive to available treatments. In particular, researchers have noted that PDAC cells can usually survive radiotherapy through mechanisms that remain largely unknown.

Part of the Radiation and Cancer Biology Group of the National Institutes for Quantum and Radiological Science and Technology, Japan, Dr. Sumitaka Hasegawa and colleagues Motofumi Suzuki and Mayuka Anko are currently studying what makes PDAC cells so radiation-resistant, and if there's a way to break through their defenses. In their latest study, published in the International Journal of Radiation Oncology, Biology, Physics, they've managed to uncover some of the mysteries underlying the curious relationship between treatment resistance in PDAC, the cell cycle, and a process called autophagy--or "self-digestion."

Every cell in our body is the result of the completion of countless cell cycles, from one cellular division to the next. Each cell cycle, shown schematically in Figure 1, is a chemically orchestrated sequence of phases in which a multitude of proteins actively control the growth of the cell and ensure it divides safely. When DNA damage is encountered, the cell cycle is halted at what's called the G2 checkpoint and division is postponed until the problem is fixed. In many types of cancers including PDAC, the G2 checkpoint is strongly activated after irradiation, which has been shown to increase resistance to therapy.

On the other hand, autophagy is a natural mechanism by which a cell digests some of its own organelles and proteins, especially damaged or unnecessary ones, to reclaim nutrients and maintain proper internal conditions, among other functions. While essential for healthy cells, researchers have found that autophagy increases in cancer cells right after radiation treatment and that it actually helps them endure and survive therapy.

Most interestingly, because autophagy and the G2 checkpoint share some of the same chemical signals, it has been suggested that these two processes are interrelated. "Although a relationship had been proposed, the mechanistic details of the interactions between autophagy and the G2 checkpoint after irradiation were unclear. Thus, in our recent study, we sought to understand more about the link between these processes, especially in PDAC cells," explains Dr. Hasegawa.

After numerous experiments in PDAC cell cultures, the team of scientists led by Dr. Hasegawa determined that irradiation-induced autophagy is dependent on the G2 checkpoint being activated. Moreover, they showed that autophagy helped the irradiated PDAC cells generate more energy (in the form of a molecule called ATP), which in turned led to their survival. Thus, the team proceeded to analyze what happened to irradiated PDAC cells when the G2 checkpoint was chemically inhibited. These irradiated cells, which could not activate the G2 checkpoint, did not undergo autophagy, and thus were much more likely to die post-radiation (Figure 2).

These promising results were then tested in mice onto which PDAC cells were transplanted to produce tumors. By treating these mice with both radiation and the G2 checkpoint inhibitor, the scientists managed to greatly suppress tumor growth compared to when irradiation was administered alone (Figure 3). In essence, this means that suppressors of the G2 checkpoint, which also mitigate autophagy, could be effectively used as tools to lower the radiation resistance of PDAC cells. "Our research," concludes Dr. Hasegawa, "should facilitate the development of radiosensitizers or new radiotherapeutic strategies for PDAC. In turn, this could largely improve the survival rate of patients with this type of cancer."

Further studies will be needed to better understand the connection between the G2 checkpoint and autophagy and how these processes make cancer cells more resistant. Let us hope scientists eventually find ways to effectively combat particularly difficult cancer types, such as PDAC, and give more years of life to affected people.

About Dr. Sumitaka Hasegawa from National Institutes for Quantum and Radiological Science and Technology, Japan:

Sumitaka Hasegawa is a physician-scientist and currently a group leader of the Radiation and Cancer Biology Group at the National Institutes for Quantum and Radiological Science and Technology, Japan. He graduated from Nagasaki University Graduate School of Biomedical Sciences after graduating from the medical school of Nagasaki University. He spent as a postdoc at UCLA and the Stanford University. He has many publications in the field of cancer research, radiation oncology, and nuclear medicine, including prestigious journals such as Nature, Science, Journal of the American Chemical Society, and the Proceedings of the National Academy of Sciences of the United States of America.

About National Institutes for Quantum and Radiological Science and Technology, Japan: The National Institutes for Quantum and Radiological Science and Technology (QST) was established in April 2016 to promote quantum science and technology in a comprehensive and integrated manner. QST's mission is to raise the level of quantum and radiological sciences and technologies through its commitment to research and development into quantum science and technology, the effect of radiation on humans, radiation emergency medicine, and the medical use of radiation. To ensure that research and development delivers significant academic, social and economic impacts, and to maximize benefits from global innovation, QST is striving to establish world-leading research and development platforms and explore new fields. Website: https://www.qst.go.jp/site/qst-english/

Funding information: This study was supported by the Japanese Society for the Promotion of Science KAKENHI (Grant number 18K15653 [MS]) and research grants from the National Institutes for Quantum and Radiological Science and Technology.

The National Institutes for Quantum Science and Technology

Figure 2. Cell survival after combination of X-ray irradiation with a G2 checkpoint inhibitor 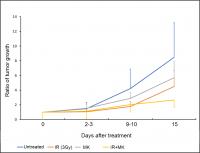