RIVERSIDE, Calif. – An international team of scientists from UC Riverside, the Massachusetts Institute of Technology and other institutions has found the oldest evidence for animals in the fossil record.

The researchers examined sedimentary rocks in south Oman, and found an anomalously high amount of distinctive steroids that date back to 635 million years ago, to around the end of the last immense ice age. The steroids are produced by sponges – one of the simplest forms of multicellular animals.

The researchers argue that the discovery of the sponges is evidence for multicellular animal life beginning 100 million years before the Cambrian explosion, a well-studied and unique episode in Earth history that began about 530 million years ago when, as indicated by the fossil record, animal life diversified rapidly.

The discovery can help scientists reconstruct Earth's early ecosystems and explain how animal life may have first evolved on the planet.

"Our findings suggest that the evolution of multicellular animals began earlier than has been thought," said Gordon Love, an assistant professor of Earth sciences, who led the research group. Love began working on the project while he was a postdoctoral researcher at MIT. "Moreover, sponges live on the seafloor, growing initially in shallow waters and spreading, over time, into deeper waters, implying the existence of oceanic environments which contained dissolved oxygen near the shallow seafloor around 635 million years ago."

Study results appear in the Feb. 5 issue of Nature.

According to Love, the climatic shock of the extensive glacial episodes of the Neoproterozoic era (1000-542 million years ago) likely caused a major reorganization of marine ecosystems, perhaps by irrevocably altering ocean chemistry.

"This paved the way for the evolution of animal feeders living on the seafloor," he said. "We believe we are converging on the correct date for the divergence of complex multicellular animal life, on the shallow ocean floor between 635 and 750 million years ago."

The steroids that Love and his colleagues observed in the Omani rocks are essential biochemicals present in the cell membranes of the sponges, and help provide the membranes with structural support. The sponges are a few millimeters in size, immobile, and were filter feeders existing on the seafloor.

The sponge findings emerged from a project Love was working on at MIT (with Roger Summons, a professor of geobiology) in collaboration with Petroleum Development Oman. Using state-of–the-art techniques, he and his colleagues analyzed 64 Neoproterozoic-Cambrian sedimentary rock samples from the South Oman Salt Basin (SOSB), a region known for some of the best preserved rocks in the world. The researchers also established a robust stratigraphic and temporal framework for the SOSB rocks as part of their analysis.

Next, Love and his colleagues plan to screen other Neoproterozoic sedimentary rocks for animal steroids just before and through the Sturtian and Marinoan glaciations, the greatest ice ages known to have occurred on Earth during 850 to 635 million years ago.

"We aim to investigate the environmental context by which multicellular animal life became viable and flourished," he said.

Love obtained his Ph.D. in chemistry from University of Strathclyde, Scotland. He was a recipient of the prestigious Natural Environment Research Council Postdoctoral Fellowship to carry out organic geochemical research at University of Newcastle, United Kingdom. He joined UCR's Department of Earth Sciences in January 2007 after a postdoctoral appointment at the Massachusetts Institute of Technology.

The four-year study was funded by Petroleum Development Oman; the NASA Exobiology Program; the National Science Foundation Division of Earth Sciences; the Agouron Institute; and the NASA Astrobiology Institute. 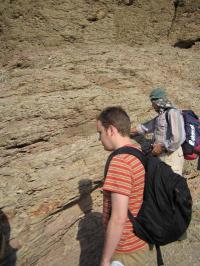 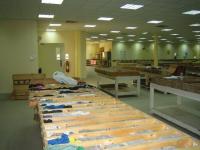