Luxembourg's research community has strengthened its commitment to Open Access through a new national publishing agreement, announced this week. The Bibliothèque Nationale du Luxembourg, the country's national library, and the open access publisher Frontiers have reached a three-year publishing deal that will run until February 2024.

Eligible authors from participating institutions now benefit from reduced administration when they publish in any one of Frontiers' portfolio of 116 open access journals at no cost to themselves. Frontiers, the Consortium and FNR will now directly manage tasks such as making payments and managing communications. Organizations benefit from online tools for eligibility verification, transparent and comprehensive reporting on expenditures, a dedicated account support manager, and publishing fee discounts.

Crucially, the agreement also means participating organizations and researchers are immediately Plan S compliant. Plan S is a multi-funder open access mandate, which from January 2021 required all scientific articles that result from research funded by public grants to be published immediately open access in compliant venues. All research published by Frontiers is inherently compliant with the policy.

Dr. Marc Schiltz, secretary general of the Luxembourg National Research Fund and President of Science Europe, said: "This agreement is another step forward in ensuring immediate open access for publicly funded research results. It also proves that open access can be easy and does not create additional administrative burdens for the parties involved."

The agreement marks Frontiers' sixth national deal and its tenth consortium agreement, bringing the total number of agreements in Frontiers' institutional membership program to 250, which includes more than 500 institutions worldwide.

This deal is Frontiers' first national agreement with a payment structure in which publishing fees are forecast and reconciled annually. The new payment model will simplify the financial administration for the deal's stakeholders in a similar vein to the way traditional subscription or hybrid publishers operate, although all Frontiers research articles are of course Open Access and free to read regardless.

Dr. Fred Fenter, chief executive editor of Frontiers said: "Today's announcement marks an important step for Luxembourg's research community, for Open Access, and Frontiers. Our national-consortium partners understand the value of Gold Open Access in our common mission to achieve open science; we salute the flexibility of Consortium Luxembourg which allowed us to find an innovative, fair, and manageable membership plan including the national funder. Luxembourg's research community joins a growing roster of countries that recognize the benefits of working at the national level with Frontiers, including the UK, Norway, Qatar, Sweden, and Austria."

About the National Library of Luxembourg

The National Library of Luxembourg (BnL) is the largest scientific library in Luxembourg holding more than 1.8 million physical documents as well as a growing number of online resources. As a heritage library, the BnL hosts an essential part of the nation's memory as all publications published in or about Luxembourg are collected through legal deposit. The printed Luxemburgensia collection is further complemented by both digital-born publications and by documents digitised by the BnL. The BnL is also a research library and offers its users access to international works in all areas of knowledge.

The Luxembourg National Research Fund (FNR) is the main funder of research activities in Luxembourg. We invest public funds and private donations into research projects in various branches of science and the humanities, with an emphasis on selected core strategic areas. Furthermore, we support and coordinate activities to strengthen the link between science and society and to raise awareness for research. We also advise the Luxembourg government on research policy and strategy.

Frontiers is an award-winning Open Science platform and leading Open Access scholarly publisher. Founded in 2007, we have published over 200,000 rigorously certified research articles by leading academics, covering more than 850 academic disciplines. Our mission is to make research results openly available to the world, thereby accelerating scientific and technological innovation, societal progress, and economic growth. We empower scientists with innovative Open Science solutions that radically improve how science is published, evaluated, and disseminated to researchers, innovators, and the public. Access to research results and data is open, free, and customized through Internet technology, thereby enabling rapid solutions to the critical challenges we face as humanity. For more information, visit http://www.frontiersin.org 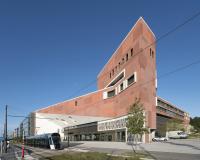