The semi-aquatic earthworms in the genus Glyphidrilus are somewhat unfamiliar species that live between the terrestrial and freshwater ecosystems of rivers, streams, canals, ponds, swamps and paddy systems. Remarkably, each species is endemic to a single water basin, carrying its own signature of evolution from their common origin. A study describing ten newly discovered species of the genus has been published in the open access journal ZooKeys.

In Thailand, the species demonstrate astonishing biodiversity due to the monsoon climate contributing to drastic river system changes and a large variety of microhabitats. While general interconnections among these allow for gene flow, their great diversity leads to independent evolution and specialization in isolation.

The animals orient themselves vertically, with their bodies in the wet soil along the banks and tails placed on the soil surface. Among the interesting characteristics of these worms is a rounded body tip, while the end is square shaped. When twisted, the posterior end, which is normally above the soil surface, forms U-shaped channels. These are used to allow water circulation down the burrow. This is probably an evolutionary adjustments that ensures oxygen transport to the deeper surface of the worms, while their bodies remain in the burrows.

Another peculiar feature are the so-called "wings", or the expanded part of epidermis near the body tip. The function of the wings is still unknown to scientists, but it has been suggested that they evolved to assist breathing in such aquatic habitats. Because the wings will be located deep in the burrow at a low oxygen supply and are absent in sexually immature juveniles, a more conventional explanation might be that they are used to aid copulation rather than respiration.

Among the natural habitats of these worms are the rice fields in Thailand, which serve as a reservoir and breeding ground for the animals. The worms turn out to play an important role in the development of rice farming, being a facilitator in the decomposition of organic matter to be a natural fertilizer, as well as improving the soil properties for better rice root system. The species also assist the release of essential minerals in some chemical fertilizers, though not in pesticides, which prove to be lethal to the worms.

The increased use of pesticides in agriculture puts these species in danger. The author Dr. Somsak Panha, from the Animal Systematics Research Unit, Chulalongkorn University in Bangkok, Thailand, comments: "The worms will survive in areas using chemical fertilizers but not those using chemical pesticides. However, the worms did well in areas of organic farming and so are likely to be sensitive to modern agrochemical contamination of the environment. They may play an important role in organic rice farming." 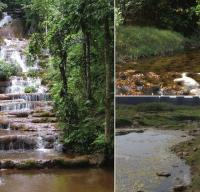 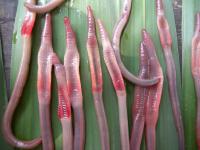