Last weekend (11-13 October), Bielefeld University's iGEM team won the European region preliminary round of the international iGEM competition. The jury was so impressed by the microbial fuel cell the team has developed to generate energy directly from bacteria that they judged them to be the best team in Europe. 'We never even dreamed that we would win,' says Lukas Rositzka, a member of the team. 'The surprise was great and the joy even greater.' iGEM stands for 'International Genetically Engineered Machine competition' and is the most important student competition in synthetic biology. It has been held every year since 2004 at the Massachusetts Institute of Technology (MIT) in Boston, USA.

Because of the continuous increase in the number of participants since 2004, teams have had to qualify for the finals in Boston in preliminary rounds held on each competing continent since 2011. It was only with the goal of qualifying that Bielefeld University's iGEM team travelled to iGEM's European Jamboree in the French city of Lyon. 'That the team went on to win first place is an outstanding success,' enthused Dr. Jörn Kalinowski who is supervising the students together with further colleagues at Bielefeld University's Center for Biotechnology (CeBiTec). A total of 60 teams from all over Europe competed at the Jamboree -- 30 of them (including the Bielefeld students) in the Overgraduate category in which team members have to be at least 23 years old. In this group, 12 teams have qualified for the finals. A total of 23 European teams will be travelling to the World Championship Jamboree in Boston.

Over the past months, the Bielefeld team spent a great deal of time in the laboratory developing a functional microbial fuel cell that uses the bacterium Escherichia coli to convert sugar directly into energy. In principle, such a fuel cell works just like a traditional battery -- with one difference. Just like a normal battery for domestic use, a microbial fuel cell consists of two separate units, the anode and cathode compartments. These two compartments are separated by a semi-permeable membrane, the proton exchange membrane . However, the difference compared to a traditional battery is that the anode compartment in the microbial fuel cell does not contain electrolytes but bacteria. These convert substrate, in this case sugar, through metabolic reactions. This produces electrons that are transferred to the anode and finally -- over an external circuit -- to the cathode. The external circuit is the application driven by the fuel cell such as a lamp or a small motor. In this way, bacteria can be used to generate electricity. By combining various genes, the Bielefeld students have managed to optimize the organism Escherichia coli for efficient electricity generation.

The students do not intend to waste the remaining time before the finals. 'We shall be trying to optimize the procedures in the laboratory,' Rositzka explains. 'Then we shall concentrate on describing our research findings as clearly as possible in our Wiki on the Internet.' Alongside the actual research work, presenting the project to the general public is a further aspect that the jury takes into account when judging the competition. The Bielefeld students also got the Best Presentation award at the European Jamboree. At the World Championship Jamboree finals at the MIT in Boston, the best 81 teams in the world will be competing with each other from 1-4 November. 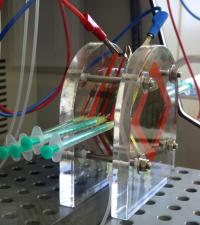