Doping is commonly used to improve performance in semiconducting devices but has not previously been successful for electron transporting or n-type, organic electronic materials. Now, an approach developed by KAUST uses a dopant, an additive that boosts the electronic performance and water stability of an n-type semiconducting polymer, to produce the first water-stable n-doped, organic electrochemical transistors, known as OECTs.

Organic electrochemical transistors comprise plastic-mixed conductors--active semiconductor layers that conduct ionic and electronic charges at the same time. These mixed conductors allow OECTs to convert ionic signals in electrolytes and biological fluids into electronic signals. However, the performance of n-type organic semiconductors lags behind that of their hole-transporting counterparts in environments dictated by biological systems, which is a major obstacle to developing logic circuits and transistor arrays.

Current methods for enhancing the electronic properties of OECTs involve synthesizing new plastic-mixed conductors. A KAUST team has chosen a simple technique using the ammonium salt tetra-n-butylammonium fluoride as an n-dopant and the conjugated polymer P-90, which contains naphthalene and thiophene units, as a mixed conductor. The team dissolved the dopant and semiconductor into two separate solutions and then combined them. "This technique can be used in any lab without being a chemist or specialist," says former KAUST postdoc Alexandra Paterson, who led the study under Sahika Inal's mentorship.

The researchers discovered that effective n-doping hinges on separating the ammonium cation from its fluoride anion. The salt transfers the fluoride anion to the polymer to generate a fluorinated P-90 radical and a P-90 anion radical. The resulting delocalized and unpaired electrons improve electrochemical doping in the OECTs.

The salt also acted as a morphology additive by reducing and smoothing the surface texture, causing aggregates to form on the polymer film, which facilitates charge transport in the film.

"The dual role of the salt impacts both electronic and ionic aspects of mixed conduction," Paterson explains.

The researchers tested the operational stability of the OECTs in air and water as well as their shelf life when stored in biological media. "The OECTs and n-doping mechanisms are extremely stable," Paterson says. This is a big achievement because while the polymers under study are designed to be stable, n-type dopants are usually unstable under electrochemical operating conditions, especially in air and aqueous solutions.

The team is now working on exploiting the long shelf life and operational stability of these n-doped OECTs for bioelectronic applications, such as glucose sensors and enzymatic fuel cells. They are also evaluating potential uses for monitoring ion channel activity in cells as well as building next-generation microscale cation sensors.

A salt solution toward better bioelectronics 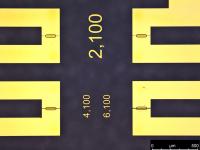