Since humans diverged from a common ancestor shared with chimpanzees and the other great apes, the human brain has changed dramatically. However, the genetic and developmental processes responsible for this divergence are not understood. Cerebral organoids (brain-like tissues), grown from stem cells in a dish, offer the possibility to study the evolution of early brain development in the laboratory.

Sabina Kanton, Michael James Boyle and Zhisong He, co-first authors of the study, together with Gray Camp, Barbara Treutlein and colleagues analysed human cerebral organoids through their development from stem cells to explore the dynamics of gene expression and regulation (using methods called single-cell RNA-seq and ATAC-seq). The authors also examined chimpanzee and macaque cerebral organoids to understand how organoid development differs in humans. "We observed more pronounced cortical neuron maturation in chimpanzee and macaque organoids compared to human organoids at the same point of development", said co-senior author Barbara Treutlein. "This would suggest that human neuronal development takes place more slowly than in the other two primates."

The researchers also identified genes exhibiting expression patterns that are unique to humans during the generation and maturation of neurons. Gene expression can be regulated by the accessibility of DNA, which can be in an open or compact state. Many of the gene expression changes that the authors identified could be linked to nearby changes in accessibility of the human genome. Most of the differentially accessible regions harbor mutations that are shared among all humans living today, some of which may be responsible for observed changes in DNA accessibility and gene expression. "Some genetic changes are predicted to alter transcription factor binding, proving a potential explanation of how these gene expression differences occur", said Gray Camp, co-senior author of the study. "Among the gene regulation changes we identified could be those contributing to the larger brain and cognitive abilities observed in humans relative to other primates."

The authors further investigated human-specific gene expression in the adult prefrontal cortex, a region of the brain that has increased in size in humans and is believed to influence complex cognitive behaviors. They identified developmental differences in gene expression that persist into adulthood, as well as changes exclusive to the adult brain in specific cell types. "Our data provide a resource to guide further research into the mechanisms of gene regulation dynamics during early brain development, especially those potentially distinguishing developing human and chimpanzee brains", conclude the authors. 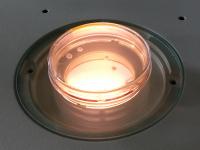