Grenoble, 12 June 2013: Swedish, Australian and French researchers present for the first time miraculously preserved musculature of 380 million year old armoured fish discovered in north-west Australia. This research will help scientists to better understand how neck and abdominal muscles evolved during the transition from jawless to jawed vertebrates. The scientific paper describing the discovery is published today in the journal Science.

The word "fossil" naturally conjures up a vision of rattling skeletons. Bones and teeth fossilise far more easily than soft tissues and are usually the only traces of the animal that remain. This makes the rare fossils of soft tissues all the more valuable as windows to the biology of extinct organisms. Such tissues almost never fossilise and scientists usually have to extrapolate skin coverings and musculature from knowledge of modern organisms and from the fossilised skeletons.

The Gogo Formation, a sedimentary rock formation in north-western Australia, has long been famous for yielding exquisitely preserved fossil fish. Among other things it contains placoderms, an extinct group that includes some of the earliest jawed fish.

A few years ago, an Australian research team work led by Prof. Trinajstic made the remarkable discovery that these fossils also contained soft tissues including nerve and muscle cells. Now they have collaborated with the research group of Professor Per Ahlberg, Uppsala University, and with the European Synchrotron (ESRF) in Grenoble, France, to document and reconstruct the musculature of the placoderms. "High contrast X-ray images were produced thanks to a powerful beam and a protocol developed for fossil imaging at the ESRF. This is unique in the world and has enabled us to "reconstruct" some fossilised muscles and document the muscles of neck and abdomen in these early jawed fish, without damaging or affecting the fossilised remains", says Sophie Sanchez, one of the authors, from the ESRF and Uppsala University.

These early vertebrates prove to have a well-developed neck musculature as well as powerful abdominal muscles – not unlike some human equivalents displayed on the beaches of the world every summer. Living fish, by contrast, usually have a rather simple body musculature without such specialisations.

"This shows that vertebrates developed a sophisticated musculature much earlier than we had thought" says Per Ahlberg, co-author of the project. "It also cautions against thinking that we can interpret fossil organisms simply by metaphorically draping their skeletons in the soft tissues of living relatives."

Putting flesh on the bones of ancient fish 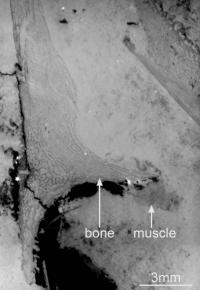 X-ray Scan of the Fossil Fish 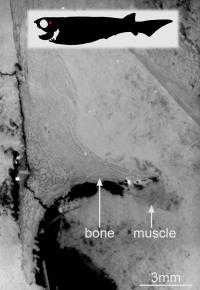 Where the Muscles Are in the Fossil Fish