The rift in the Larsen C ice shelf in Antarctica now has a second branch, which is moving in the direction of the ice front, Swansea University researchers revealed after studying the latest satellite data.

The main rift in Larsen C, which is likely to lead to one of the largest icebergs ever recorded, is currently 180 km long. The new branch of the rift is 15 km long.

Last year, researchers from the UK's Project Midas, led by Swansea University, reported that the rift was growing fast. Now, just 20km of ice is keeping the 5,000 sq km piece from floating away.

"While the previous rift tip has not advanced, a new branch of the rift has been initiated. This is approximately 10km behind the previous tip, heading towards the ice-front.

This is the first significant change to the rift since February of this year. Although the rift length has been static for several months, it has been steadily widening, at rates in excess of a metre per day.

Researchers say the loss of a piece a quarter of the size of Wales will leave the whole shelf vulnerable to future break-up. Larsen C is approximately 350m thick and floats on the seas at the edge of West Antarctica, holding back the flow of glaciers that feed into it.

The MIDAS Project will continue to monitor the development of the rift and assess its ongoing impact on the ice shelf. Further updates will be available on our blog (projectmidas.org), and on our Twitter feed" 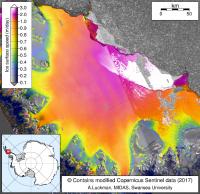