The anthocyanin pigments that provide the "blood" color of blood oranges are not produced in significant amounts unless the fruit is exposed to cold conditions during its development or post-harvest. No cold exposure means poor anthocyanin production and the loss of the entire crop. This means that blood oranges can be grown in many areas of the world, but they are most likely to be exposed to the correct temperature conditions in only a few regions, including their major area of production in Sicily. Solving the mystery of why cold exposure causes anthocyanin production would benefit both agriculture and health; like many other anthocyanin-rich foods, blood oranges have notable human health benefits. Indeed, blood oranges have the healthful vitamin C, fiber, and carotenoids of regular "blonde" oranges, with the added antioxidant punch provided by anthocyanins. However, unreliable production limits the availability and consumption of these delicacies.

Blood oranges arose as a mutation of sweet orange and were documented in Italy as early as the 1600s. In a study published in The Plant Cell, an international group coordinated by Cathie Martin of the John Innes Centre in the U.K. set out to determine why blood oranges develop anthocyanin pigments. This group found a transcriptional regulator gene, which they named Ruby; in blood oranges, Ruby increases the expression of anthocyanin-encoding genes. Indeed, when expressed in tobacco, Ruby produced red leaves by increasing anthocyanin. As one might expect, Ruby is expressed at high levels in blood oranges, and its expression correlates with the amount of anthocyanin present, with Ruby not expressed at all in blonde oranges.

Examination of the sequence of Ruby in different varieties of Citrus, such as mandarins, pummelo, and sweet oranges, also allowed the scientific team to infer the lineage of different orange types and to determine the origin of the blood orange. All of the Citrus species examined contain homologs of Ruby (highly similar sequences), but some are non-functional sequences that can't be transcribed into proteins. For example, some types, such as mandarin, contain two non-functional variants of Ruby, indicating that they could not give rise to a "blood" variety. Differences in Ruby sequence between different varieties also provided lineage information that supported the long-standing idea that sweet orange arose as a hybrid between pummelo and mandarin. Blood oranges subsequently arose from an ancient sweet orange variety of Mediterranean origin, and there is evidence that one blood orange variety arose independently in China. The most interesting finding came from examination of the Ruby sequence in blood oranges, where a mobile genetic element called a retrotransposon was found to be inserted in the genome upstream of the Ruby protein coding sequences. This retrotransposon can be actively transcribed and, in blood oranges, its transcription induces Ruby gene expression. Because retrotransposons and other mobile genetic elements can wreak genomic havoc by inserting into essential genes, plants have evolved mechanisms to suppress mobile element transcription. However, this suppression can be released under stressful conditions, including cold. Thus the induction of retrotransposon transcription by cold in blood orange varieties also induces the expression of Ruby, which increases anthocyanin production and produces the blood color.

Finding the mechanism by which cold induces the deep color of blood oranges brings us closer to more reliable worldwide production of these healthful culinary delicacies. Indeed, the future holds many interesting possibilities for Citrus research, as Cathie Martin states: "Cold-independent blood oranges could be made by genetic engineering, which would allow blood orange production in the major growing areas of Florida and Brazil, to facilitate production of healthier orange juice."

This research was supported by the EU FP6 FLORA project, the EU FP7 ATHENA collaborative project, the Biological and Biotechnological Science Research Council (UK), and the Agronanotech project, MIPAF.

The Plant Cell is published by the American Society of Plant Biologists. For more information about ASPB, please visit http://www.aspb.org/.

Figure credits: Zoe Dunford and Angie Walker (photograph of blood and blonde varieties), and Dr. Giuseppe Russo (photograph of Cetti drawing from Histoire Naturelle des Orangers, published in 1818 by P. A. Poiteau and J. A. Risso).

Restrictions: Use for noncommercial, educational purposes is granted without written permission. Please include a citation and acknowledge ASPB as copyright holder. For all other uses, contact diane@aspb.org.

Solved: The mystery of the blood orange 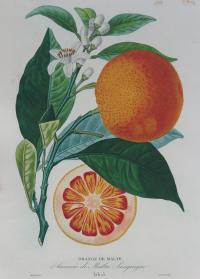