Batavia, Ill. - Physicists of the DZero experiment at the U.S. Department of Energy's Fermi National Accelerator Laboratory have discovered a new particle made of three quarks, the Omega-sub-b (Ωb). The particle contains two strange quarks and a bottom quark (s-s-b). It is an exotic relative of the much more common proton and weighs about six times the proton mass.

The discovery of the doubly strange particle brings scientists a step closer to understanding exactly how quarks form matter and to completing the "periodic table of baryons." Baryons (derived from the Greek word "barys," meaning "heavy") are particles that contain three quarks, the basic building blocks of matter. The proton comprises two up quarks and a down quark (u-u-d).

Combing through almost 100 trillion collision events produced by the Tevatron particle collider at Fermilab, the DZero collaboration found 18 incidents in which the particles emerging from a proton-antiproton collision revealed the distinctive signature of the Omega-sub-b. Once produced, the Omega-sub-b travels about a millimeter before it disintegrates into lighter particles. Its decay, mediated by the weak force, occurs in about a trillionth of a second.

The Omega-sub-b is the latest and most exotic discovery of a new type of baryon containing a bottom quark at the Tevatron particle collider at Fermilab. Its discovery follows the observation of the Cascade-b-minus baryon (Ξb-), first observed by the DZero experiment in 2007, and two types of Sigma-sub-b baryons (Σb), discovered by the CDF experiment at Fermilab in 2006.

"The observation of the doubly strange b baryon is yet another triumph of the quark model," said DZero cospokesperson Dmitri Denisov, of Fermilab. "Our measurement of its mass, production and decay properties will help to better understand the strong force that binds quarks together."

According to the quark model, invented in 1961 by theorists Murray Gell-Mann and Yuval Ne'eman as well as George Zweig, the four quarks up, down, strange and bottom can be arranged to form 20 different spin-1/2 baryons. Scientists now have observed 13 of these combinations.

"The measurement of the mass of the Omega-sub-b provides a great test of computer calculations using lattice quantum chromodynamics," said Fermilab theorist Andreas Kronfeld. "The discovery of this particle is an example of all the wonderful results pouring out of accelerator laboratories over the past few years."

The Omega-sub-b is a relative of the famous and "even stranger" Omega-minus, which is made of three strange quarks (s-s-s).

"After the discovery of the Omega-minus, people started to accept that quarks really exist," said DZero co-spokesperson Darien Wood, of Northeastern University. "Its discovery, made with a bubble chamber at Brookhaven National Laboratory in 1964, is the textbook example of the predictive power of the quark model."

The DZero collaboration submitted a paper that summarizes the details of its discovery to the journal Physical Review Letters. It is available online at: http://www-d0.fnal.gov/Run2Physics/WWW/results/final/B/B08G/

DZero is an international experiment of about 600 physicists from 90 institutions in 18 countries. It is supported by the U.S. Department of Energy, the National Science Foundation and a number of international funding agencies. Fermilab is a national laboratory funded by the Office of Science of the U.S. Department of Energy, operated under contract by Fermi Research Alliance, LLC. 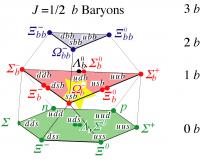 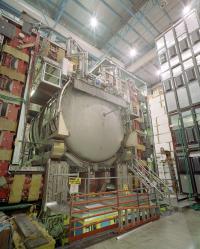