On Oct. 8 at 4:05 a.m. EDT (0805 UTC), the Visible Infrared Imaging Radiometer Suite (VIIRS) instrument aboard NASA-NOAA's Suomi NPP satellite captured an infrared and nighttime imagery of Hurricane Delta as it moved through the Gulf of Mexico.

One hour before Suomi NPP passed overhead, Delta had winds of 100 mph, making it a Category 2 storm on the Saffir-Simpson Hurricane Wind Scale. "The imagery showed enhanced convection near the center of circulation, though the actual circulation was covered by a central dense overcast (CDO) feature, but the curved bands beyond that, extending all the way to the U.S., can also be seen," noted William Straka III, researcher at University of Wisconsin - Madison's Space Science and Engineering Center, Cooperative Institute for Meteorological Satellite Studies, Wisconsin.

"The Waning Gibbous moon (65% illumination) was enough to see both the tropospheric waves as well as the CDO and long ranging feeder bands (of thunderstorms."

NASA provides all of this data to tropical cyclone meteorologists so they can incorporate it in their forecasts.

NHC forecaster Jack Beven noted, "Satellite imagery shows that Delta is better organized this morning, with the center well embedded in a cold central dense overcast and a hint of an eye developing in the overcast."

Watches and Warnings on Oct. 8

A Tropical Storm Watch is in effect from east of the mouth of the Pearl River to Bay St. Louis Mississippi.

At 11 a.m. EDT (1500 UTC), the center of Hurricane Delta was located near latitude 24.0 degrees north and longitude 92.7 degrees west. That is about 400 miles (645 km) south of Cameron, Louisiana. Delta was moving toward the northwest near 14 mph (22 kph), and this motion with a reduction in forward speed is expected today.  Reports from NOAA and Air Force Reserve Hurricane Hunter aircraft indicate that maximum sustained winds have increased to near 105 mph (165 kph) with higher gusts.  The latest minimum central pressure reported by the Hurricane Hunter aircraft is 968 millibars.

NHC expects a turn toward the north by late tonight, followed by a north-northeastward motion by Friday afternoon or Friday night.  Additional strengthening is forecast, and Delta is expected to become a major hurricane again by tonight.  On the forecast track, the center of Delta will move over the central Gulf of Mexico today, over the northwestern Gulf of Mexico on Friday. Some weakening is possible as Delta approaches the northern Gulf coast on Friday, with rapid weakening expected after the center moves inland within the hurricane warning area Friday afternoon or Friday night. 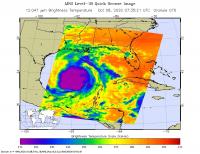