EAST LANSING, Mich. – Among spotted hyenas, being a supermom is less about packing lunches, and more about packing a hormonal punch that gives her cubs a powerful head start.

In a study appearing in the April 26 edition of the international science journal Nature, Michigan State University zoology professor Kay Holekamp and Stephanie Dloniak along with Jeffrey French from the University of Nebraska, report that high-ranking, dominant spotted hyena mothers pass to their offspring high levels of certain hormones that make cubs more aggressive and sexually vigorous – in other words more likely to survive, thrive and reproduce.

The study shows that alpha females have higher levels of androgen during the final stages of pregnancy than lower-ranking group members.

“What this means is that there are gifts a mom can give to her baby,” said Holekamp, who also is a recent recipient of a 2006 Guggenheim Fellowship for her work on hyenas. “She can manipulate her offspring’s behavior and help her kids to survive and reproduce successfully by transferring status-related traits via prenatal hormone exposure.”

“This research sheds light on mammalian reproductive biology and helps us imagine how evolution might have produced such a bizarre product,” Holekamp said

The findings result from nearly two decades of National Science Foundation-funded research spent studying wild spotted hyena populations in Kenya. The paper outlines the first instance where researchers have shown that a female mammal’s hormones can influence her offspring’s behavior and appearance.

Androgen is just one of the many hormones traveling across the placenta to the developing fetus. This hormone mediates masculine characteristics like aggression, muscle development and male-typical sexual behavior.

But it’s not just the male cubs that stand to benefit from the maculinizing effects of androgens. Females gain just as much.

Normally, when it comes to muscle mass, aggressive behavior and dominance, males have a leg up, but hyenas take this norm and turn it on its head.

“You don’t find many mammals where the female is the boss,” Holekamp said.

The sex roles in spotted hyenas are completely reversed from those in most mammals: females are larger and more aggressive than males when competing for limited resources and dominate the 40 to 60 members of their social group.

In fact, females look so much like males the average person may have trouble differentiating between the sexes. A female hyena’s genitals have evolved into something that looks more like a penis than a vagina.

Holekamp and her colleagues speculate that the behaviors attributed to exposure to high levels of prenatal androgens may be evolution’s way of offsetting the negative consequences associated with mating and giving birth through a penis-like structure.

A spotted hyena’s vaginal canal makes a hairpin turn and exits the body like a penis. The opening of the vaginal canal is at the end of an elongated clitoris, nearly six to seven inches in an adult, that looks remarkably like a penis, Holekamp said.

Not surprisingly, ancient people, like the Greek philosopher Aristotle, thought hyenas were hermaphrodites.

The characteristics of the genitalia are responsible for some obvious anatomical challenges that arise when it’s time for a hyena to mate and give birth.

Mating is tricky to say the least. A male must position himself at just the right angle to enter the female’s clitoris. If the match is successful, a mother hyena will give birth to each of her 2-pound cubs through the elongated clitoris, which doubles its diameter from one to two inches for the occasion.

“It’s really weird genitalia, but it seems to work. Although giving birth through a ‘penis’ isn’t a trivial problem.” Holekamp said. “All her female-typical behaviors are there – she’s been masculinized without being defeminized.”

The physical characteristics and behaviors handed down from alpha moms to their babies may be helpful in understanding how this unique genitalia evolved and why it works.

Mating that culminates in pregnancy and successful rearing of young is contingent on a female’s ability to secure food resources. More aggressive females are better able to compete for food when hyenas squabble over carcasses of gazelles, wildebeest and zebras, which are their main prey.

Young males exposed to higher levels of prenatal androgen exhibit mounting behaviors more often than the males born to lower-ranking females. In other words, they get more practice at the difficult art of hyena mating, Holekamp said.

Holekamp plans to use her Guggenheim Fellowship to write a book and do research at the University of California, Berkeley, which has a facility housing about 50 hyenas for study purposes. The fellowships are awarded to artists, scholars and scientists for distinguished past achievements and exceptional promise of future accomplishments.

Michigan State University has been advancing knowledge and transforming lives through innovative teaching, research and outreach for 150 years. MSU is known internationally as a major public university with global reach and extraordinary impact. Its 15 degree-granting colleges attract scholars worldwide who are interested in combining education with practical problem solving.

For MSU news on the Web, go to newsroom.msu.edu 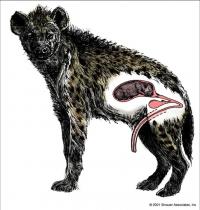