There are around 550 different bee species in Germany. Most of them are solitary bees. They don't live in large beehives like the honeybee, but each female bee often builds multiple nests and feeds her offspring alone. Solitary bees use their short lifespan of a few weeks exclusively to reproduce and to provide food for their brood to develop into adult bees. Bees depend on the availability of pollen which they can frequently collect on specific plant species only.

Therefore, good timing is crucial when the insects hatch. This is particularly true in early spring when there is the risk that no plants are available to the bee if it has emerged from hibernation too early. As global warming may have a different impact on the time when different species emerge in spring, temporal mismatches may occur between bee and plant species.

What happens when a bee hatches before its food plants start to flower and it has to do without food during the first days of its life? A team of researchers from the Department of Animal Ecology and Tropical Biology of the University of Würzburg's Biocenter has looked into this question. The scientists present the results of their work in the Journal of Animal Biology.

Timing" has investigated three different species of spring-emerging bees. The findings of their study are alarming: "Already a minor temporal mismatch of three or six days is enough to harm the bees," Mariela Schenk, the author of the study, explains.

For the purpose of the study, the researchers set up 36 large flight cages. This controlled environment allowed the scientists to make the bees hatch either simultaneously with the flowering of the plants in the cage or three and six days previously. Subsequently, they monitored the bees over their entire lifespan. The scientists recorded the daily activity of the bees and also how many nests and brood cells the bees produced.

What they found was that not all individuals survived three or six days without food plants. And the ones that made it exhibited less activity and reduced reproductive output.

Negative consequences despite change in behaviour

These negative consequences occurred even though the insects had adopted several behavioural strategies to mitigate the impact. One of the three bee species, for example, tried to reduce the effort of providing for the young by producing fewer female and more male offspring. Male offspring requires less food than the much bigger young females. "But this approach could result in a decline in population," Mariela Schenk says.

Another bee species tried to save time in the production of offspring by distributing the same number of brood cells among fewer nests. This strategy, however, increases the risk that the entire brood falls prey to predators and parasites.

A further strategy one bee species adopted was to increase its activity in the second half of its life. But this method, too, was not sufficient to prevent negative consequences. Ecologist Mariela Schenk explains: "Although we found that the bee species we investigated developed species-specific strategies to mitigate the impact of temporal mismatches, the insects still suffered severe fitness loss."

Dr Andrea Holzschuh, who is also an ecologist and in charge of the study, adds: "Not only can such developments further exacerbate the decline of solitary bees, they can also reduce plant pollination in general." To make matters worse, the negative consequences of temporal mismatching of bees and plants seems to be particularly pronounced in very warm springs. 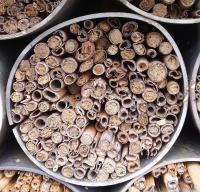