Getting ketchup out of the bottle isn’t always easy. However, shaking the bottle before trying to pour allows the thick, gooey ketchup to flow more freely because it becomes more fluid when agitated. The opposite is not typically true – a liquid such as water does not become a gel when shaken.

However, new research published in the March 14 issue of the journal Physical Review Letters shows that when fluids like water and silicon oil are confined to a nanometer-sized space, they behave more like ketchup or toothpaste. Then, if these confined liquids are shaken, they become fluidic and exhibit the same structural and mechanical properties as those in thicker layers.

The study – the first to use an atomic force microscope to measure the viscosity of confined fluids – revealed that these liquids can respond and modify their viscosity based on environmental changes.

“Knowing this could be very important,” said Elisa Riedo, an assistant professor in the Georgia Tech School of Physics. “If a lubricant used in a piece of machinery becomes thick and gelatinous when squeezed between two solid surfaces, serious problems could occur. However, if the machine vibrated, the liquid could become fluidized.”

With funding from the National Science Foundation and the U.S. Department of Energy, Riedo and graduate student Tai-De Li used atomic force microscopy (AFM) to measure the behavior of thin and thick layers of liquids while they were vibrated. A nanometer-size spherical silicon tip was used to approach a mica surface immersed in water or silicon oil, while small lateral oscillations were applied to the cantilever support.

“Some researchers have measured the force it takes to squeeze out a fluid, but we took a different approach,” explained Riedo. “We are the first group to use AFM to study the viscosity of confined fluids from direct high-resolution lateral force measurements.”

The normal and lateral forces acting on the tip were measured directly and simultaneously as a function of the liquid film thickness. The ratio of stress to strain under vibratory conditions, called the viscoelastic modulus, was also measured at different frequencies and strains.

Riedo and Li measured the relaxation times of two wetting liquids: water and silicone oil (octamethylcylotetrasiloxane), which is primarily used as a lubricant or hydraulic fluid, and is the main ingredient in Silly Putty®.

Experimental results showed that the relaxation time became orders of magnitude longer in water and silicone oil when they were confined, meaning they behaved more like gels or glass. The researchers also showed that the relaxation times depended on the shaking speed when the liquids were confined. However, in thick layers that were not confined, the molecules showed no dependence on the shaking speed and always relaxed very quickly, meaning they behaved like a “normal” liquid.

Longer relaxation times were observed when the water film was less than one nanometer thick, composed of about three molecules of water stacked on top of each other. Otherwise, its properties were the same as in a bottle of water. For silicone oil, a thickness of four nanometers was required before the properties were like those of a glassy material.

“We observed a nonlinear viscoelastic behavior remarkably similar to that widely observed in metastable complex fluids, such as gels or supercooled liquids,” noted Riedo. “Because we observed these phenomena in both water and silicone oil, we believe they are very general phenomena and may apply to all wetting liquids.”

Since the behavior of confined water observed in these experiments is similar to the behavior of supercooled water at -98.15 degrees Celsius, the researchers are currently examining whether confinement defines a lower effective temperature in the confined liquid.

The views and opinions of authors expressed herein do not necessarily state or reflect those of the United States Government or any agency thereof. 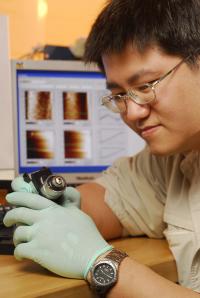