University of Maryland astronomers Silvia Protopapa and Douglas Hamilton are among the authors of the first published paper from the New Horizons flyby, which appears in the Oct. 16, 2015 issue of the journal Science. Protopapa helped map the composition of Pluto's surface and locate ices on it. Hamilton helped confirm the shapes, sizes and unique rotations of two of Pluto's moons and the finding that no other moons appear to orbit Pluto. The findings will help scientists understand the origins and subsequent history of Pluto and its moons.

The color image of Pluto published in the Science paper and obtained with the spacecraft's Multi-spectral Visible Imaging Camera (MVIC) reveals a wide range of colors across Pluto's surface--from dark, red regions at the equator to brighter, bluer regions at higher latitudes. A heart-shaped region interrupts this pattern by displaying different colors in its western and eastern lobes.

"We knew Pluto's surface was heterogeneous based on ground-based data. However, I was astonished to see such spectacular surface color and geological diversity," said Protopapa, an assistant research scientist in astronomy at UMD who joined the New Horizons surface composition team led by Will Grundy of the Lowell Observatory a year before closest approach. In previous work, Protopapa used ground-based spectroscopic measurements and sophisticated modeling to determine the surface composition of Pluto and one of its moons, Charon. She also conducted laboratory experiments to establish the spectral behavior of mixtures containing various ratios of methane and nitrogen at different temperatures, which will help her interpret the New Horizons data.

To explore whether Pluto's color diversity is due to its composition, Protopapa and her colleagues analyzed data from the spacecraft's Linear Etalon Imaging Spectral Array (LEISA). LEISA is a near-infrared spectral imager designed to map the surface composition of Pluto and its moons. Methane, carbon monoxide, nitrogen and water ices, and other materials including organic compounds absorb light at different near-infrared wavelengths, allowing the compounds to be detected using the LEISA spectrometer.

LEISA data released by NASA but not included in the Science paper reveals numerous small exposed regions of water ice in the red areas of the color images taken by the MVIC. This data offers the first clear evidence of water ice on Pluto, following decades of trying to detect it using Earth-based telescopes.

"Water ice is a new element that we must consider as we try to piece together Pluto's complex surface composition," said Protopapa.

The red color on the surface indicates the presence of organic compounds called tholins, which are the result of energetic irradiation of methane, nitrogen and carbon monoxide mixtures. However, Protopapa and her colleagues do not yet understand the relationship between water ice and tholins on Pluto's surface. Why water ice appears where it does and not elsewhere, and which types of tholins are present on Pluto's surface are questions Protopapa and the New Horizons surface composition team hope to answer . The team also plans to compare the New Horizons mission data with ground-based measurements taken at different seasons during Pluto's orbit to obtain a more complete picture of the complex mechanisms that shape Pluto's surface.

Pluto isn't alone in having water ice on its surface--measurements indicate that Nix and Hydra, two of Pluto's five moons, are also covered with water ice. However, the bright surfaces of the two moons surprise astronomers because a variety of external processes should have darkened the surfaces of these moons over time. The rotational patterns of Pluto's moons also puzzle astronomers, as the two moons do not always have the same face locked toward Pluto.

"We knew Nix and Hydra were slowly tumbling in unpredictable ways, based on ground-based findings we published earlier this summer in Nature. With New Horizons data, we now believe Nix and Hydra are spinning really fast and rotating in an odd way, and may be the only regular moons, meaning satellites that are near their host planets, which do not always point the same face toward their primary body," said Hamilton, an astronomy professor at UMD who discovered Pluto's moon Kerberos in 2011 with Mark Showalter of the SETI Institute.

According to Hamilton, the strange rotation patterns of these two moons could be due to the system's domination by Pluto and its largest moon, Charon, which together form a "binary planet."

"It's possible that Nix and Hydra can't focus on locking one face toward Pluto because Charon keeps sweeping past and stirring things up," said Hamilton.

Data published in the Science paper confirms ground-based measurements detailing the similar sizes and shapes of Nix (30 miles by 20 miles) and Hydra (27 miles by 20 miles). The surface compositions of the moons also appear similar--Hydra boasts several crater-like features, and Nix sports a large crater that appears to be a different color than the rest of the moon. The New Horizons team expects to learn more about the surface composition of the moons when they download additional LEISA data.

Something the team won't need to do is analyze new moons.

"Based on the data, we can confidently say that between Pluto and its outermost moon Hydra there are no new icy objects with a diameter larger than 1.5 kilometers (0.9 miles), which is about five times smaller than Pluto's smallest known moon Styx," said Hamilton.

During the approach to Pluto, Hamilton helped ensure that the New Horizons spacecraft would not encounter nor crash into any previously undiscovered moons, rings or debris as it approached and passed by Pluto. Hamilton was part of a 10-person team that spent more than a year streamlining its image analysis process before closest approach. If team members identified a possible moon or debris in an image and fit an orbit to the object, Hamilton used the University of Maryland's new Deepthought2 supercomputer to predict how much debris might be released from the object and hit the spacecraft as it traveled through five possible trajectories. Other team members used this information to predict spacecraft survival.

"We practiced and trained so hard, but when we analyzed images from the New Horizons spacecraft during its approach, we didn't find any new moons, rings or debris orbiting Pluto," said Hamilton.

In addition to Protopapa and Hamilton, UMD alumnus Matthew Hill (M.S. '98, Ph.D. '01, physics) was also a co-author on the Science paper.

This research was supported by NASA's New Horizons project. The content of this article does not necessarily reflect the views of this organization. 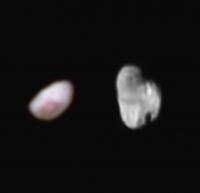