Recent Landsat satellite data captured by the USGS and NASA on May 10 shows the major flooding of the Mississippi River around Memphis, Tenn. and along the state borders of Tennessee, Kentucky, Missouri, and Arkansas as seen from 438 miles above the Earth.

The flood crest of 47.87 feet on May 10, is the second highest rise in recent history; the highest being 48.7 feet in 1937. Five counties surrounding Memphis have been declared disaster areas, and the costs of the flooding are expected to approach $1 billion. The Mississippi River crest continues to move south and is expected to occur in the Greenville, Miss. Area around May 16 to finally crest in New Orleans around May 23.

"Landsat imagery is crucial in helping to monitor the flood rate and effects of the flooding in the region, and to aid in the decision making process regarding flood control. Decisions such as closing portions of the Mississippi River to shipping and opening flood gates outside of low-lying New Orleans in preparation to the flood wave as it makes its way slowly down the river to the Gulf of Mexico," said Mark Anderson, Acting Director of the USGS Earth Resources Observation and Science Center.

James Irons, Landsat Data Continuity Mission (LDCM) Project Scientist at NASA Goddard Space Flight Center in Greenbelt, Md. said, "NASA Goddard has managed the development of all the successfully launched Landsat satellites and is currently developing the next Landsat satellite system, the Landsat Data Continuity Mission, in partnership with USGS." The launch of LDCM is scheduled for December, 2012.

Remotely sensed data are not the only science endeavors occurring due to floods. The USGS collects river data through its network of about 7,700 stream gauges around the Nation. You can receive instant, customized updates about water conditions, including flooding, by subscribing to USGS WaterAlert (› http://water.usgs.gov/wateralert).

The scenes captured by Landsat 5 show the Mississippi River in the Memphis, Tenn. area, and along the state borders of Tennessee, Kentucky, Missouri, and Arkansas. The January images show the river before it began to flood. In the May images, the dark blue tones are water, the light green is cleared fields, and the light tones are clouds.

For more NASA imagery on the current Mississippi flooding, visit: 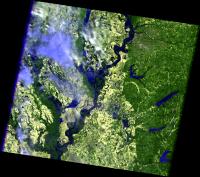