RIVERSIDE, Calif. – With the Easter holiday season coming up soon, egg consumption is expected to rise temporarily. But are hens in egg farms producing the maximum number of eggs they can?

"Parasites such as fowl mites that commonly infest hens can reduce egg production by five percent or more," says Bradley A. Mullens, a professor of entomology at the University of California, Riverside. "One way to boost egg production is to rid the hens of these parasites."

In a research paper published online March 18 in the journal Parasitology, Mullens and colleagues argue that the chicken body louse, also a poultry parasite, can be used to effectively eradicate the mites if egg-producing commercial farms follow a simple, green strategy involving an odd twist on biological control – the science of managing agricultural pests with natural enemies rather than pesticides.

The researchers propose that the lice, which outcompete or feed on mites, first be introduced into a flock of mite-infested hens so that the lice can get rid of all the mites. Then, after the facility is mite-free, the initial flock of hens (with only lice on them) is cleared from the facility to make way for the next flock of uninfested hens. Thereafter, the hens remain free of mites.

"Mites are capable of wiping out all profits from the egg production system, and, currently, egg producers never really can get rid of mites that have infested their hens," Mullens says. "Mites spread very easily and persist for weeks in an empty poultry house between flocks. Further, the pesticides used today to reduce the mite infestation not only fail to eradicate the mites but introduce environmental and health concerns. But the green method we are proposing in our paper is capable of fully eliminating the mites. Once a flock is moved out of a facility, any relic lice away from a hen will die in a few days or less. Thus, in chicken houses typically left vacant for two weeks between flocks of hens, the new uninfested hens would remain louse-free."

The strategy proposed by Mullens and his colleagues would eliminate the need for pesticide applications as well as the risk posed to workers from pesticide exposure. It would require producers to tolerate some temporary damage from lice, which Mullens admitted might be a "tough sell", although it could happen late in an egg production cycle, when egg production drops somewhat anyway.

"Moreover, at present, egg handlers on farms face the risk of skin irritation when they encounter large number of mites on eggs, and this usually triggers costly chemical treatments by producers," Mullens says. "Our strategy would also eliminate the need for such treatments."

The research, which was performed on 74 hens in experimental hen houses at UC Riverside, was supported by a grant from the U.S. Department of Agriculture Western Regional Integrated Pest Management Center.

Mullens was joined in the study by UCR's Brian L. Chen (first author and now a veterinarian in Southern California) and Kathryn L. Haith.

Next, the Mullens lab will focus on the role that dust-bathing – the activity in which a bird intentionally settles into a wallow in the ground and fluffs around to let dust into its feathers – might play in controlling lice and mites on hens.

The University of California, Riverside (www.ucr.edu) is a doctoral research university, a living laboratory for groundbreaking exploration of issues critical to Inland Southern California, the state and communities around the world. Reflecting California's diverse culture, UCR's enrollment has exceeded 20,500 students. The campus will open a medical school in 2012 and has reached the heart of the Coachella Valley by way of the UCR Palm Desert Graduate Center. The campus has an annual statewide economic impact of more than $1 billion.

A broadcast studio with fiber cable to the AT&T Hollywood hub is available for live or taped interviews. To learn more, call (951) UCR-NEWS. 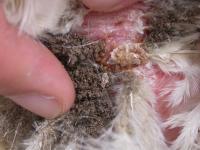