One hundred and thirty years ago, the volcano Krakatoa erupted in what is now Indonesia, unleashing a cataclysm locally and years of cool temperatures and rain globally. On the far side of the world, a bumper crop of saguaro cacti were getting their start in life in Arizona's Sonoran Desert. Many of the large exemplars of the famous cacti standing spiny and tall with arms akimbo in the Southwest today started their lives in the shadow of the 1883 eruption.

Biogeographer Taly Drezner believes that distant volcanic paroxysms and the emergence of bountiful saguaro age-mate cohorts are connected. Volcanic climate perturbations that delivered disastrously cold and stormy weather to much of the Northern Hemisphere generated a combination of conditions in the Sonoran Desert that were just right for the delicate young cacti. Drezner will present her research on the first known example of regional population effects on a species from volcanic eruptions in distant parts of the world on 9 August 2016 at the 101st Annual Meeting of the Ecological Society of America, gathering this year in Fort Lauderdale, Florida.

"The saguaro is key to the survival of many species. Almost every animal in the Sonoran uses them in some way, as a nest site, or food, or a cool refuge," said Drezner, a professor at York University in Ontario, who studies among other things, how heat and aridity shape the community of life in the desert. Temperatures can easily exceed 40 C (104 F) every day for weeks in summer, when saguaro seedlings have just germinated.

A keystone species of the Sonoran ecosystem and charismatic cultural emblem of the arid southwestern United States, the saguaro (Carnegiea gigantea) is sturdy in maturity but delicate in the early years of its life. Though mature individuals can top 12 meters (40 feet), new cacti grow only a few millimeters in the first year. Tiny young saguaros are susceptible to heat and cold, vulnerable to drying out or freezing in the extremes of their desert environment. For a critical two to three years, until they grow large enough to withstand cold and drought, they demand cool summers, mild winters, and sufficient rain: a combination of weather conditions at the outer edge of normal for the Sonoran in every dimension. A summer may be relatively cool, but too dry. A winter wet, but too cold. In most years, all the baby saguaros die.

In the year after Krakatoa, summer temperatures in the Northern Hemisphere fell 1.2?C below average. The eruption violently disgorged tons of ash and sulfur dioxide gas into the stratosphere. Dust particles and sulfuric acid droplets rode winds through the upper atmosphere, conspiring in a haze that reflected sunshine and lowered global temperatures. Though not as disruptive as the "year without a summer" that followed the eruption of Mount Tambora in 1815, Krakatoa's influence was seen and felt around the globe in vivid sunsets and stormy weather. Southern California experienced a "water year" of record rainfall. Sulfate aerosols in particular can hang out in the atmosphere for years, and Krakatoa released an unusual abundance of sulfur. Typical temperature and weather patterns did not recover for years. For the saguaro, the perturbations appear to have amounted to a collection of "just right" conditions for new growth.

"I started noticing that these saguaro age cohorts followed notable volcanic eruptions," said Drezner. "I knew that volcanoes drive milder summers and winters, and typically more rainfall for an extended period--two to three years after the event, which is a perfect window of time for the saguaro to get established and have a chance to survive."

To investigate her hunch, Drezner went to Kofa National Wildlife Refuge near Yuma, Arizona, where limited water pushes the physiological limits of the saguaro, to sample the age structure of the local cacti. Rainfall at Kofa is a third of other locations in the Sonoran. Cacti do not have rings, like trees, that make age simple to gauge. Drezner estimated the ages of 250 cacti based on meticulous calculations of local growth rates using a model she pioneered. She added data from 30 locations in the Northern Sonoran Desert and compared the generational cohorts of the cacti to climate datasets for the region and the annual Weighted Historical Dust Veil Index, an indicator of volcanism.

"The saguaro are protected because they are a beloved symbol and icon of the desert," Drezner said. They are not currently threatened, but the unpredictable nature of their reproduction makes some conservators nervous about how the giants will respond to a changing climate. "That a volcano elsewhere on the continent, or even the other side of the world, can so profoundly influence a local population underscores interconnectedness of ecosystems and our global climate."

LNG 1-3 - Erupting volcanoes promote species regeneration on the other side of the world: the inter-connectedness of geology, climate and ecosystems

Meeting
2016 Annual Meeting of the Ecological Society of America 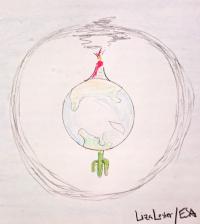