CORVALLIS, Ore. – In an analysis of 446 compounds for their the ability to boost the innate immune system in humans, researchers in the Linus Pauling Institute at Oregon State University discovered just two that stood out from the crowd – the resveratrol found in red grapes and a compound called pterostilbene from blueberries.

Both of these compounds, which are called stilbenoids, worked in synergy with vitamin D and had a significant impact in raising the expression of the human cathelicidin antimicrobial peptide, or CAMP gene, that is involved in immune function.

The findings were made in laboratory cell cultures and do not prove that similar results would occur as a result of dietary intake, the scientists said, but do add more interest to the potential of some foods to improve the immune response.

The research was published today in Molecular Nutrition and Food Research, in studies supported by the National Institutes of Health.

"Out of a study of hundreds of compounds, just these two popped right out," said Adrian Gombart, an LPI principal investigator and associate professor in the OSU College of Science. "Their synergy with vitamin D to increase CAMP gene expression was significant and intriguing. It's a pretty interesting interaction."

Resveratrol has been the subject of dozens of studies for a range of possible benefits, from improving cardiovascular health to fighting cancer and reducing inflammation. This research is the first to show a clear synergy with vitamin D that increased CAMP expression by several times, scientists said.

The CAMP gene itself is also the subject of much study, as it has been shown to play a key role in the "innate" immune system, or the body's first line of defense and ability to combat bacterial infection. The innate immune response is especially important as many antibiotics increasingly lose their effectiveness.

A strong link has been established between adequate vitamin D levels and the function of the CAMP gene, and the new research suggests that certain other compounds may play a role as well.

Stilbenoids are compounds produced by plants to fight infections, and in human biology appear to affect some of the signaling pathways that allow vitamin D to do its job, researchers said. It appears that combining these compounds with vitamin D has considerably more biological impact than any of them would separately.

Continued research could lead to a better understanding of how diet and nutrition affect immune function, and possibly lead to the development of therapeutically useful natural compounds that could boost the innate immune response, the researchers said in their report.

Despite the interest in compounds such as resveratrol and pterostilbene, their bioavailability remains a question, the researchers said. Some applications that may evolve could be with topical use to improve barrier defense in wounds or infections, they said.

The regulation of the CAMP gene by vitamin D was discovered by Gombart, and researchers are still learning more about how it and other compounds affect immune function. The unique biological pathways involved are found in only two groups of animals – humans and non-human primates. Their importance in the immune response could be one reason those pathways have survived through millions of years of separate evolution of these species. 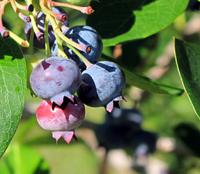