(Santa Barbara, Calif.) –– After almost four decades of absence from local waters, a special sea slug appears to be making a comeback, and marine scientists at UC Santa Barbara are eagerly anticipating its return.

With its vivid blue and gold colors and its discovery by UC zoologists in 1901, the nudibranch Felimare californiensis, also known as the California chromodorid, has been a favorite species of sea slug for UC marine scientists and students for decades. But while it held a special place in their hearts, it lost its place in local waters, which once included La Jolla, Corona del Mar, Malibu, and Santa Barbara, as well as all but the two westernmost Channel Islands.

"We'll be pretty excited if someone finds the nudibranch in mainland tidepools, after this 35-year hiatus," said Jeff Goddard, project scientist with UCSB's Marine Science Institute. His findings have been published online in a recent edition of the journal Marine Biology.

In the 1970's, the abundant F. californiensis started to disappear from Southern California, and by 1984, was extinct in the region. Its disappearance from the mainland, said Goddard, is unique among the 130 species of sea slugs known to inhabit California waters.

"Its decline is not shared by closely related nudibranchs with similar historical geographic distributions and mode of development," said Goddard, "and is not predicted by warming trends and climate variation over the past 40 years, including the strong El Niño events of 1983 and 1998."

In their paper, Goddard and his collaborators conclude that water pollution from the heavily populated and urbanized southern California mainland is the most likely factor, compounded by historical over-collecting of the nudibranch and habitat loss through the development of major ports and marinas. The researchers suspect that degraded water quality, which reached a low point in the Southern California Bight in the 1970's, affected either the slugs' food –– sponges –– or the cyanobacteria that live in a symbiotic relationship with the sponges, especially near the mainland.

However the deep blue slug with the bright gold spots reappeared in 2003 off Santa Catalina Island, and in 2011 the rare and highly sought animal was again spotted off Santa Cruz Island and off the coast of San Diego.

"Since the passage of the Clean Water Act in 1972, big strides have been made in reducing pollutants in the Southern California Bight, especially from large wastewater outfalls, and these improvements may have allowed Felimare californiensis to regain a foothold in the region," said Goddard.

The current population status of F. californiensis in Southern California remains tenuous, but Goddard is encouraged by its persistence at Catalina in marine protected areas, including the popular, no-take Casino Point State Marine Conservation Area (SMCA) and the recently established Blue Cavern SMCA.

He and the paper's co-authors, biology professor Ángel Valdés from Cal Poly Pomona; CSU Northridge student researcher Craig Hoover; and visiting colleague and sea slug expert Maria Schaefer plan to continue to monitor the population at Catalina, examine changes in genetic variation in the nudibranch since its decline, and study the distribution and abundance of its sponge prey.

Goddard is also collaborating with Mike Miller, webmaster of the popular Slug Site, on a video about the disappearance of F. californiensis for the 2013 San Diego Undersea Film Festival. 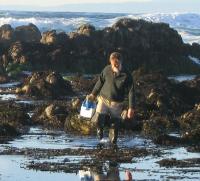