The proportion of land used to cultivate shade grown coffee, relative to the total land area of coffee cultivation, has fallen by nearly 20 percent globally since 1996, according to a new study by scientists from The University of Texas at Austin and five other institutions.

The study's authors say the global shift toward a more intensive style of coffee farming is probably having a negative effect on the environment, communities and individual farmers.

"The paradox is that there is greater public interest than ever in environmentally friendly coffee, but where coffee production is expanding across the globe, it tends to be very intensive," says Shalene Jha, assistant professor in The University of Texas at Austin's College of Natural Sciences and lead author of the study published April 16 in the journal Bioscience.

Traditional shade grown coffee is cultivated under a diverse canopy of native forest trees in dense to moderate shade. Though some of the forest understory is cleared for farming, a rich web of plant and animal life remains. As a result, shade grown coffee plantations provide corridors for migrating birds to move between forest fragments, attract and support economically valuable pollinators such as bees and bats, and provide ecosystem services such as filtering water and air, stabilizing soil during heavy rains, storing carbon and replenishing soil nutrients.

"We were surprised that despite two decades of growth in public awareness of where coffee comes from and the different ways to manage it for biodiversity, shade grown coffee only seems to be grown in a few regions," says Jha. "The shifts aren't what we would expect based on what we see on the shelves in the U.S."

The study also found that since 1990, the land area under coffee cultivation has contracted in Africa and expanded in Asia. Within Asia, Vietnam and Indonesia have had the largest increases in coffee production during that time. Most of the new production is done in an intensive style.

This more intensive style is characterized by clearing forests or pasture for cultivation, increasing the density of plantings and switching to a variety of coffee called Robusta that tolerates full sun. Robusta is a lower-quality coffee than the other major variety sold around the world, Arabica. The two strains are often blended to produce instant coffee.

Jha and colleagues say the shifting trends toward Asia and a more intensive style of farming are driven by a dramatic drop in global coffee prices in recent years. To remain profitable, some growers have moved, seeking lower land and labor costs and higher short-term yields.

But there are hidden costs to this more intensive style. Full sun coffee plantations often result in deforestation, loss of biodiversity and soil depletion while leaving communities more vulnerable to flooding and landslides.

"Intensive coffee production is not sustainable," says Jha. "You exhaust the soil and after a couple of decades, it can no longer grow coffee. On the other hand, the oldest coffee farms in the world have thrived for centuries because the forest replenishes the soil for them."

Because the up-front costs of getting certified to sell specialty coffees can be expensive, Jha and colleagues encourage government agencies, conservation groups and aid organizations to partner with farmers to develop strategies to get more farmers into shade grown coffee production.

Some of the data used in this study came from the United Nations Food and Agriculture Organization and from interviews with coffee authorities, government agencies and private corporations. 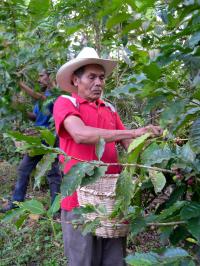