Along the western edge of Alaska's Aleutian archipelago, a group of islands that were inadvertently populated with rodents came to earn the ignominious label of the "Rat Islands." The non-native invaders were accidentally introduced to these islands, and others throughout the Aleutian chain, through shipwrecks dating back to the 1700s and World War II occupation. The resilient rodents, which are known to be among the most damaging invasive animals, adapted and thrived in the new setting and eventually overwhelmed the island ecosystems, disrupting the natural ecological order and driving out native species.

A coordinated conservation effort that removed the rats from one of the islands formerly known as Rat Island has become a new example of how ecosystems can fully recover to their natural state in little more than a decade. The ecological rebound at newly named Hawadax Island (a return to the original Aleut name meaning "the island over there with two knolls") extended from land to the island's interconnected marine community. Results of a study published in Scientific Reports and led by a University of California San Diego researcher has documented the remarkable recovery.

"We were surprised that the level of recovery unfolded so quickly--we thought it could be longer," said Carolyn Kurle, an associate professor in the UC San Diego Division of Biological Sciences Section of Ecology, Behavior and Evolution and lead author of the new study, which includes researchers from UC Santa Cruz, Island Conservation, the U.S. Fish and Wildlife Service and The Nature Conservancy.

Kurle has taken part in research expeditions to more than 35 of the islands in the Aleutian chain. She and her colleagues conducted surveys at Hawadax in 2008 when the invasive rodents dominated the island ecosystem. As a new, direct predator to native island species, the rats unleashed a cascade of disruption for the island's food chain. They preyed upon shore bird eggs and chicks, which nearly wiped out the island's breeding shorebird population. Without birds consuming herbivorous seashore invertebrates such as snails and limpets, the island's intertidal plant-eaters flourished, significantly driving down the abundance of the marine kelp.

To reverse these effects, a coordinated conservation strategy to save the native species on Hawadax removed the rats in 2008. The effort presented a rare case in which researchers were able to compare ecosystem data from surveys during rat dominance with a recovering ecosystem five years later and a fully recovered system after 11 years.

"You don't often get the opportunity to return to a remote location and collect data after the fact," said Kurle, who noted that the researchers also compared the survey data with naturally balanced ecosystems on neighboring islands that had never been occupied with rats. "Sometimes it's hard to say that a conservation action had any sort of impact, but in this particular case we took a conservation action that was expensive and difficult, and we actually demonstrated that it worked. But we didn't expect it to be so fast."

With the rats removed at Hawadax, the seabirds returned and are again consuming the seashore invertebrates, which has allowed the recovery and rebound of the kelp community.

"Invasive rats are almost always direct predators of native animals when they become introduced on islands," said Kurle. "So when the birds returned it led to an entirely different structure in the marine community on this island. It now has a structure that more closely resembles what we observe on islands that have never had rat invaders."

The researchers say more studies that focus on understanding and measuring both direct and indirect impacts of invaders, and how inter-connected communities respond following removal of those impacts, are needed to underscore the broad conservation successes associated with invasive species eradication, especially on islands.

"This study both confirms the profound impacts of introduced species like rats across entire sensitive island ecosystems while at the same time demonstrating the remarkable conservation benefits of their removal," said Donald Croll, study co-author and professor in the Ecology and Evolutionary Biology Department at UC Santa Cruz. 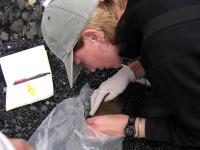