CABI scientists have led the first assessment of naturalised, invasive and potentially invasive plant species present in Laikipia County, Kenya, which hosts the highest populations of endangered large mammals in the country.

The research led by Dr Arne Witt suggests that a range of invasive alien plants pose a series risk to the County - home to the second-highest number of endangered wildlife in East Africa including elephant, rhino, Grevy's zebra, reticulated giraffe and wild dogs.

Together with CABI colleagues Winnie Nunda and Tim Beale along with help from Dr Darren Kriticos of the University of Queensland, Australia, Dr Witt argues that without efforts to eradicate, contain, or control invasive plant species in Laikipia County many rare and iconic wildlife species may be lost.

As outlined in the journal Koedoe: African Protected Area Conservation and Science, the researchers strongly advocate the use of biological controls as cost effective, safe and environmentally sustainable ways to manage some of the invasive plants as part of an integrated management plan.

Broadscale roadside surveys were carried out in Laikipia County, to record all naturalised and invasive species. This data was supplemented by CLIMEX eco-climatic niche models of nine species that the scientists consider to pose the biggest threat to conservation initiatives in the East African region.

Widespread species in the County included Opuntia stricta, O. ficus-indica, Austrocylindropuntia subulata and other succulents. Of the 145 alien plant species recorded, 67 and 37 (including four species of uncertain origin) were considered to be already naturalised or invasive, respectively, and a further 41 species had been recorded as being naturalised or invasive outside of Laikipia. Most (141) of these species were introduced as ornamentals only or had uses in addition to being ornamentals, with the majority (77) having their origins in tropical America.

Based on the current eco-climatic conditions, most of Laikipia is unsuitable for Chromolaena odorata, marginally suitable for Mimosa pigra and Lantana camara, and a better climatic match, ranked from least to most favourable, for Tithonia diversifolia, Cryptostegia grandiflora, Parthenium hysterophorus, Prosopis juliflora, O. stricta, and Parkinsonia aculeata.

Dr Witt said, "The County is home to the second-highest abundance of wildlife in East Africa, after the Mara-Serengeti ecosystem, and hosts the highest populations of endangered large mammals in Kenya.

"Alien plant invasions pose significant threats to conservation and livelihoods in Laikipia. As such, it would be prudent to develop and implement management strategies to reduce the threats of all invasive and potentially invasive plant species.

"It is imperative that all naturalised, invasive and potentially invasive plant species be removed from the grounds of all tourist facilities and possibly also villages that fall within areas where the main land-use practice is livestock production and conservation.

"Those plants which have already escaped cultivation should be eradicated, if possible, or their further spread contained. Finally, biological control solutions for widespread and abundant species should be implemented wherever possible, as has been done for O. stricta and initiated for O. engelmannii."

Dr Witt added that there are many benefits to the use of biological controls including the fact that many agents establish self-perpetuating populations, often across the whole range of the target species, and most projects only require a one-off investment.

"There are a number of widespread and abundant invasive plant species in Laikipia that could be targeted for biological control," he said. "The cochineal Dactylopius opuntiae (Cockerell) 'stricta' biotype (Dactylopiidae), recently introduced for the control of O. stricta, is already established in Laikipia. Species such as O. ficus-indica and O. monacantha have also been brought under good control through the introduction of cochineal in the last century."

Permission is currently being sought from the regulatory authorities to introduce another biotype of D. opuntiae for the control of O. engelmannii. Cereus jamacaru has also been brought under good biological control in South Africa, an option should this species become invasive, although populations are currently such that it can still be eradicated in Laikipia.

Main image: The reticulated giraffe is among a range of endangered species whose habitat is at risk from invasive plants in Laikipia County, Kenya (Credit: Arne Witt).

This paper, including the full lists of species surveyed, is available to view open access here: https://koedoe.co.za/index.php/koedoe/article/view/1605/2566 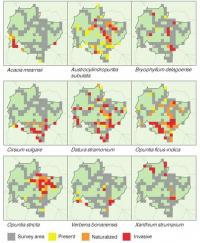