Spanish children are overexposed to TV ads of unhealthy food (burgers, pizzas, soft drinks, chocolate, bakery, etc.) both in generalist and children-oriented channels, a situation that could be described as "worrying" and which promotes childhood obesity.

This follows a pioneering study carried out by scientists from the University of Granada (belonging to the Center of Excellence in Pediatric Research Euristikos and the departments of Pharmacology and Pediatrics) in collaboration with the University Hospital San Rafael (Granada).

The goal of this work was to evaluate the changes experienced by Spanish TV between 2007 and 2013, before and after the entry into force of the Spanish and European public health regulations governing the broadcast of fast food ads on TV. Said regulations came into force in 2011 (Law 17/2011 on Food Safety and Nutrition).

To do this, the researchers recorded and analyzed a total of 1263 ads, corresponding to a total of 256 hours of television. All of them were broadcast on the two most-viewed children-oriented channels watched by Spanish children between 2 and 12 years, and two generalist channels targeting all audiences.

The record was carried out by a nutritionist specialized in marketing, who classified the different types of ads based on the amount of nutrients, subliminal messages and recommendations on healthy habits they gave.

Thematic channels broadcast 16 food advertisements per hour, a figure that rises to 25 in the case of generalist channels.

The most broadcast ads

The results showed that the broadcast of these ads on children-oriented thematic channels increased between 2007 and 2013 (from 6 to 10 ads per hour and channel, respectively), similar to what happens with the generalist channels, where, despite the regulations, the broadcast of 'junk food' advertisements has also increased.

Given the results of their work, the researchers warn of the need to increase control over food commercials that are broadcast on Spanish television, "and take advantage of the level of attention that children pay to television as they watch cartoons to promote healthy lifestyles and a healthy nutrition, with the goal of preventing overweight and obesity", professor Cristina Campoy Folgoso, UGR professor and lead author of this work, says.

The researcher warns that it would be necessary to analyze a larger sample of television channels, in order to know, with precision, the information that Spanish children are getting through advertising.

She also notes that "there is currently no control of the advertisings that reach children through games downloaded to their cellphones and tablets as well as in social networks, so it is very necessary to legislate said aspect". 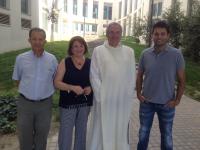