Some symptoms of Lyme disease include fever, headache, and fatigue, all of which can be mistaken for the common flu, so medical personnel need to know where these ticks are found in order to make a correct diagnosis. Unfortunately, the range of blacklegged ticks had not been re-evaluated in nearly two decades, until now.

Dr. Rebecca Eisen, a research biologist at the U.S. Centers for Disease Control, observed that the last comprehensive survey of blacklegged tick distribution was published in 1998. To remedy this, she and her colleagues performed a new survey to establish the current geographic distribution.

The team used surveillance methods similar to those used in 1998 so that they would be able to accurately judge the degree to which the distribution of these ticks had changed. Using the gathered data, they figured out which counties had established populations, which ones had one or more reports of a blacklegged ticks, and which ones had none.

Most of the geographic expansion of the blacklegged tick appears to be in the northern U.S., while populations in southern states have remained relatively stable. The range of the western blacklegged tick only increased from 3.4% to 3.6% of counties.

"This study shows that the distribution of Lyme disease vectors has changed substantially over the last nearly two decades and highlights areas where risk for human exposure to ticks has changed during that time," Dr. Eisen said. "The observed range expansion of the ticks highlights a need for continuing and enhancing vector surveillance efforts, particularly along the leading edges of range expansion."

The full article, "County-Scale Distribution of Ixodes scapularis and Ixodes pacificus (Acari: Ixodidae) in the Continental United States," is available at https://jme.oxfordjournals.org/content/early/2016/01/15/jme.tjv237.

The Journal of Medical Entomology is published by the Entomological Society of America, the largest organization in the world serving the professional and scientific needs of entomologists and people in related disciplines. Founded in 1889, ESA today has nearly 7,000 members affiliated with educational institutions, health agencies, private industry, and government. Members are researchers, teachers, extension service personnel, administrators, marketing representatives, research technicians, consultants, students, and hobbyists. For more information, visit http://www.entsoc.org. 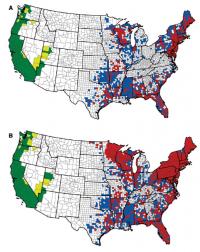