WASHINGTON--Tidal stresses may be causing constant icequakes on Saturn's sixth largest moon Enceladus, a world of interest in the search for life beyond Earth, according to a new study. A better understanding of seismic activity could reveal what's under the moon's icy crust and provide clues to the habitability of its ocean.

Enceladus is about 500 kilometers in diameter and almost entirely covered in ice. The moon is nearly 10 times as far away from the Sun as Earth and its bright surface reflects most sunlight, making it very cold, yet researchers have long speculated that the ice encases an underlying liquid ocean.

The moon likely experiences massive tidal forces caused by Saturn and the planet's other, larger moons--similar to the way Earth's Moon causes tides on Earth. These tidal motions inside Enceladus warm its interior, crack the surface and sometimes squeeze tall geysers of water vapor through notable cracks called the tiger stripe fractures.

The new study used observations of Antarctic ice shelves to suggest tides on Enceladus may also cause small quakes in the ice at the moon's fractures, like icequakes observed on Antarctica's floating ice sheets.

"[Moons like] these are places that are exciting because they might have life," said Kira Olsen, a geophysicist at NASA's Goddard Space Flight Center. She said that since life is thought to have first developed in our oceans, liquid oceans under the ice of other worlds could be a good place to search for life. The icy crust of Enceladus might also protect the water below from radiation, making it more habitable.

The new study was published in the Journal of Geophysical Research: Planets, AGU's journal for research on the formation and evolution of the planets, moons and objects of our solar system and beyond.

"We have ideas of how thick the ice could be, but we don't have direct observation. Studying ice quakes is a way to get at that information," Olsen said.

To learn more about how Enceladus' tiger fractures might be moving, Olsen and her colleagues turned to floating ice shelves in Antarctica as the closest analogue on Earth for the types of activity they were seeing on Enceladus. They could then use their knowledge about how certain surface features on our planet produce seismic activity to estimate what kind of seismic activity is happening on the distant moon.

The researchers analyzed data collected by seismometers along the Ross Ice Shelf in the southern continent between 2014 and 2016 and compared these to satellite images of the area. They paid particular attention to two seismometers placed next to large rifts on the ice slab.

They related the seismic activity to the stress occurring along these rifts. The majority of icequakes on the Ross Ice Shelf occurred when the rifts were pulling apart, which happens when tides are falling.

We have no measurements of seismic activity on Enceladus, but Olsen and her colleagues created models that compared the types of fractures they saw on the moon's surface with those on the Ross Ice Shelf.

These models showed that the largest amount of seismic activity on Enceladus likely corresponded to the tides. Peak seismic activity there occurs when Enceladus is 100 degrees past the nearest approach to Saturn during its orbit. The ocean underneath the ice at this point acts something like water inside a sloshing balloon. The ice fractures are created at the points of highest stress, where the balloon would break apart.

The icequakes aren't massive along these cracks, even at the peak periods of stress. Olsen describes them more like "almost continuous little pops and fractures.

Mark Panning, a research scientist at NASA's Jet Propulsion Laboratory who was not involved in the new study, said that while the Cassini spacecraft revealed the moon is geologically active, it's difficult to tell how that translates to seismic activity. "The study represents a really key way of investigating what seismicity on Enceladus and other tidally activated icy worlds may look like by looking at the best analogs we can find on Earth," he said.

Olsen said scientists should aim to place seismometers within 10 kilometers of these fractures in any future missions to Enceladus to learn more about what's going on below.

"It's not a quiet out of the way place, but it's a pretty good place to study," she said.

More information about the seismic activity could then teach us more about the thickness of the ice crust on Enceladus. For now, no missions to Enceladus have been planned, but the European Space Agency is planning the JUICE mission to one of Jupiter's icy moons, Europa.

Olsen said that similar work could then be conducted on Titan, Saturn's largest moon, a world also covered with ice that may conceal liquid oceans and is another top pick for potential extraterrestrial life. NASA's Dragonfly mission is scheduled to visit Titan in 2036.

"This kind of work is one of the best ways to try to get an idea of what behaviors we may see on a planetary body that would be an incredible place to do more science," Panning said.

AGU (http://www.agu.org) supports 130,000 enthusiasts to experts worldwide in Earth and space sciences. Through broad and inclusive partnerships, we advance discovery and solution science that accelerate knowledge and create solutions that are ethical, unbiased and respectful of communities and their values. Our programs include serving as a scholarly publisher, convening virtual and in-person events and providing career support. We live our values in everything we do, such as our net zero energy renovated building in Washington, D.C. and our Ethics and Equity Center, which fosters a diverse and inclusive geoscience community to ensure responsible conduct.

"Projected seismic activity at the tiger stripe fractures on Enceladus, Saturn, from an analog study of tidally modulated icequakes within the Ross Ice Shelf, Antarctica" 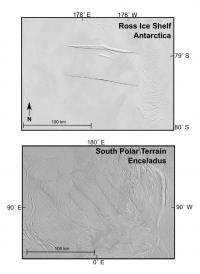