Scientists from Paris, Newcastle and Helmholtz-Zentrum Berlin have been able to switch on and off robust ferromagnetism close to room temperature by using low electric fields. Their results are inspiring for future applications in low-power spintronics, for instance, in fast, efficient and nonvolatile data storage technologies.

The sample consisted of a ferroelectric BaTiO3 substrate covered with a thin film of magnetic FeRh. Experiments at BESSY II combined with other measurement methods demonstrated how the magnetic order of the sample changes dramatically, when a moderate external electric field is applied: The electric field induces strain in the crystal structure of the ferroelectric substrate, which is transferred to the thin FeRh-film and switches its magnetic ordering from ferromagnetic (large magnetization) to antiferromagnetic (zero magnetization). The effect is ten times larger than previously observed in other magnetic structures and especially promising since it is found close to room temperature. The results have been published online on 26 January in Nature Materials, DOI: 10.1038/NMAT3870.

The ability to turn on and off robust ferromagnetism at room temperature and low electric fields has remained elusive until now. Nevertheless, such magnetic switches would be extremely useful for spintronic devices and future data storage technologies.

Now a materials system has been grown by scientists at Unité Mixte de Physique CNRS/Thales and Université Paris Sud which has interesting properties. As measurements of Sergio Valencia, Akin Ünal and Florian Kronast from HZB demonstrated, their magnetization can be controlled by means of electric fields. The change achieved in the magnetization with moderate electric field is one magnitude higher than observed previously in any other materials:

The new structure consists of a ferroelectric BaTiO3 crystal substrate, covered with a thin film of magnetic FeRh. To obtain microscopic information about the magnetic order, the HZB team took high-resolution magnetic images at the spin-resolved photo-emission electron microscope at BESSY II at different voltages at a temperature of 385 K or 112 °Celsius. "We have found that in FeRh/BaTiO3 even a moderate electric field can produce a giant magnetization variation, arising from the electric-field-induced transformation of the FeRh from an ferromagnetic state to an antiferromagnetic state", Valencia says.

The detailed analysis of the data in the light of first-principles calculations indicate that the phenomenon is mediated by both strain and field effects from the BaTiO3. The results correspond to a magnetoelectric coupling larger than previous reports by at least one order of magnitude. The possibility of toggling between magnetic states by means of an electric field and at very low power offers an attractive alternative to heat-assisted magnetic recording. This technology uses a laser pulse to heat a magnetic bit above a certain temperature at which the magnetic field generated by the write-head can reliably switch the magnetization direction. "On a broader perspective, our work emphasizes the relevance of hybrid perovskite/metal systems such as BaTiO3/FeRh for low-power spintronic architectures. In the future, it would be attractive to combine FeRh with piezoelectric elements with giant responses. The effect could be further increased and tuned to a range of operating temperatures, including room temperature, by using Palladium-substituted FeRh", Valencia points out.

Magnetic switch gets closer to application 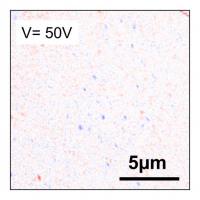 Magnetic Switch Gets Closer to Application (2 of 2)