Stuart Lindsay, director of the Biodesign Institute's Center for Single Molecule Biophysics is on the forefront of this research, having successfully addressed a central stumbling block in nanopore sequencing—reading single nucleotide bases in a DNA chain. Lindsay's latest experimental results, which demonstrate critical improvements in DNA reads, have just appeared in the journal Nanotechnology.

Once accurate sequencing falls below the threshold of $1000 per genome, the technology should become ubiquitous, according to many. As the current Science overview suggests, that day may be drawing near as both the speed and cost of whole genome sequencing advances at a pace outstripping Moore's famous Law, (which dictates a doubling of computing power—and halving of the expense—every 18 months).

The latest technological competition involves the idea of threading a single strand of DNA through a tiny, molecular-scale eyelet known as a nanopore. This strategy may soon allow the entire DNA sequence to be read in one go, rather than cut apart, deciphered in brief fragments and painstakingly re-assembled.

While the first sequencing of the human genome took researchers 13 years and $3 billion to achieve, under the auspicies of the Human Genome Project , the feat may soon be accomplished at the blinding rate of 6 billion nucleotide bases every 6 hours at a cost of $900. At least that is the extravagant claim being made by Oxford Nanopore Technologies, one of the pioneering companies driving new sequencing developments.

Since the seemingly quixotic idea of nanopore sequencing was first thought up in the mid 1990s, enormous advances have been made. The basic idea is that when a nanopore is immersed in a conducting fluid and a voltage is applied across it, conduction of ions through the nanopore will produce a measurable electric current. This current is highly sensitive to the size and shape of the nanopore and in theory, each nucleotide base in the DNA thread will obstruct the nanopore as it migrates, altering the ionic current in a recognizable and reproducible way.

The DNA "thread" is tricky material to manipulate however—so fine that it would take about 5000 DNA strands laid side by side to equal the width of a human hair. Just finding a suitable eyelet at this scale proved a challenge. At first, porous, transmembrane proteins were explored. Alpha hemolysin (αHL), a bacterium that causes lysis of red blood cells, seemed a particularly promising candidate, given the nanopore diameter required for sequencing DNA.

Since then, other protein-based portals for DNA have been tinkered with and more recently, various "solid state" nanopores of silicon or graphene have been investigated. These can be more easily fabricated and their properties, more precisely controlled.

According to Science's review of the present state of the art, nanopore sequencing "seems poised to leave the lab," and the dream of a $1000 genome may be close at hand, though challenges remain. A persistent problem in sequencing individual bases has been that they tend to stream through the nanopore too rapidly to pinpoint each base independently. Instead, the measured current in early experiments reflected the average produced by a group of bases wending their way through the tunnel.

Lindsay's technique relies on reading electrical current in a tiny circuit composed of a DNA nucleotide trapped between a pair of gold electrodes, which span a nanopore. The electrodes are made by functionalizing the tip of a scanning tunneling microscope (STM), with molecules that can bind individual DNA bases as they poke their heads through the nanopore.

Recognition Tunneling, the name Lindsay applies to his sequencing method, relies on outfitting one of two electrodes with sensing chemicals, the other with the nucleotide target to be sensed. A signal is produced when the junction between sensing chemical and target self-assembles, closing the circuit.

In this type of junction, where lengths separating electrodes are down to a molecular scale, electrons can exhibit odd behavior associated with the quantum subatomic world, "tunneling" through barriers under conditions prohibited by classical physics. In such a scenario, each of the 4 nucleotides should produce a signature tunneling current, which can be used to sequence DNA base-by-base as it feeds its way through the nanopore. Trapping each base momentarily allows time for an accurate identification, before it is released and the DNA thread continues its transmigration through the nanopore.

Replacing ionic current flow with tunneling current can potentially improve sequencing resolution considerably and in their latest work, Lindsay's group demonstrates that multiparameter analysis of the current spikes produced by tunneling can indeed identify each DNA base as it is temporarily pinned by hydrogen bonding between the functionalized electrodes.

In addition to pinpointing nucleotide identity with greater than 90 percent accuracy, the technique also permits environmental gene modifications to be identified, for example, methylation. This represents a major advance for sequencing, as such epigenetic alterations to the genome have profound implications for the study of human health and disease, including embryonic and post-natal development, and cancer.

The Nanotechnology paper describes a new approach to analyzing the tunneling signals. The Lindsay group used machine learning (the process used by IBM's Watson to win at Jeopardy) to train a computer to recognize the DNA bases. The machine called all four bases (A,T,C and G) as well as the "fifth base"—methyl— that carries the epigenetic code, with 96 percent accurarcy on a single molecule read.

"Oxford Nanopore have a made a tremendous breakthrough in nanopore sequencing using ion current, as highlighted in the NEWSFOCUS story," Lindsay says. "But we think we can bring even more to the table with the supersensitivity and chemical resolution of Recognition Tunneling."

The high stakes race for rapid sequencing appears to be entering the home stretch, though new surprises are likely before the finish line. Once it is crossed, the era of personalized medicine will have arrived. Many new insights into the genomic basis of human health and disease are almost certain to follow.

Sequence it…and they will come! 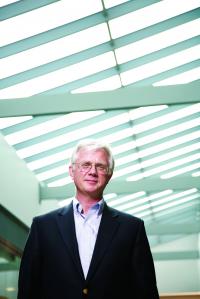