Guadalupe fur seals (Arctocephalus townsendi) have established a large resting colony in the Gulf of California--bringing the total number of sites where this endangered species now occurs to just four. This new haul-out was discovered on El Farallón de San Ignacio Island, along the mainland coast of Mexico, according to researchers from Mexico and the University of British Columbia.

Guadalupe fur seals were hunted for their furs and declared extinct in the late 1800's. However, 14 individuals were discovered on Guadalupe Island in 1950--and the population has grown since then. While still designated as vulnerable to extinction, according to IUCN, the population is believed to total 41,000 individuals and is growing at an annual rate of 10-11 per cent per year.

While the only breeding site for this species continues to be on Guadalupe Island, a large resting colony or 'haul-out' was established in the late 1990s on the nearby San Benito Islands in the Pacific Ocean, off the coast of Baja California.

Now, a second, well-populated haul-out colony has also begun forming, this time off the Mexican coast in the Gulf of California.

"We observed a single adult male Guadalupe fur seal ashore at El Farallón de San Ignacio Island in 2008, and later spotted several juvenile fur seals in 2014 and 2016. This led us to increase our observation efforts in 2019, with wonderful results," said Claudia Hernández-Camacho, corresponding author, and professor in the Centro Interdisciplinario de Ciencias Marinas, Instituto Politécnico Nacional. "During our visits to El Farallón in 2020, we counted 492 individuals in January, and 771 in November. Most of the animals we have seen have been juveniles, and all have appeared to be in good body condition."

"We at first thought that the animal sighted in 2008 was an anomaly," said Andrew Trites, professor in the Marine Mammal Research Unit, based in UBC's Institute for the Oceans and Fisheries, and co-author of the research findings. "El Farallón is a small, hot and arid island, and not a place where anyone would have expected to find fur seals. However, the past six years of observation have shown that the young Guadalupe fur seals clearly like it. The question is why?"

In addition to the new colony discovered at El Farallón de San Ignacio Island, a smaller haul-out also in the southern Gulf of California has also been growing since 2019 on nearby Las Animas Islet.

Both of these haul-outs in the Gulf of California are in protected areas, known as Áreas de Protección de Flora y Fauna Islas del Golfo de California. However the needs of Guadalupe fur seals are not addressed by those protected areas because the seals were previously considered only as occasional visitors.

With the confirmed establishment of the El Farallón colony, it is important that Mexico develop a conservation policy that addresses the importance of the southern Gulf of California as a feeding ground for vulnerable Guadalupe fur seals.

Overall, Guadalupe fur seals are slowly increasing in the southern Gulf of California--and are known to range as far as the coastlines of Washington and British Columbia. However, they only occur in just four places in Mexico.

"Guadalupe fur seals have only one breeding colony, so the new haul-outs in the southern Gulf of California provide some good news. However, the new sites will need regular monitoring to document their growth and possible changes in body conditions, age and sex-composition, and breeding potential", said Trites.

"This species escaped extinction once and remains vulnerable." 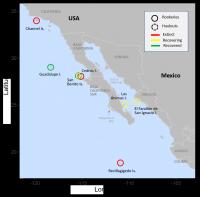