Researchers reporting in the Cell Press journal Current Biology on April 17 have discovered little-known cave insects with rather novel sex lives. The Brazilian insects, which represent four distinct but related species in the genus Neotrogla, are the first example of an animal with sex-reversed genitalia.

"Although sex-role reversal has been identified in several different animals, Neotrogla is the only example in which the intromittent organ is also reversed," says Kazunori Yoshizawa from Hokkaido University in Japan.

During copulation, which lasts an impressive 40 to 70 hours, female insects insert an elaborate, penis-like organ into males' much-reduced, vagina-like opening. The researchers speculate that the insects' sex organs and sex-role reversal may have been driven over evolutionary time by the resource-poor cave environment in which the bugs live. Males of the genus provide females with nutritious seminal gifts in addition to sperm, making it advantageous for females to mate at a higher rate.

At first, Rodrigo Ferreira from the Federal University of Lavras in Brazil was focused on a description of species in the cave environment where Neotrogla lives. He sent specimens off to insect specialist Charles Lienhard in Geneva, who recognized them as a new genus. Lienhard also discovered the females' very impressive penis-like organs.

Yoshizawa joined the team to take a closer look. To learn more, the researchers observed the mating behavior of all four species to find that the penis-like structure, termed the gynosome, is inserted into males and used to receive generous capsules of nourishment and sperm. Once inside a male, the membranous part of the female gynosome inflates and numerous spines internally anchor the two insects together.

In one instance, when the researchers attempted to pull a male and female apart, the male's abdomen was ripped from the thorax without breaking the genital coupling. In other words, it appears that females can hold males very tightly indeed.

The findings pave the way for interesting studies in these insects to learn what makes them so special. Neotrogla offers new opportunities to test ideas about sexual selection, conflict between the sexes, and the evolution of novelty, the researchers say.

"It will be important to unveil why, among many sex-role-reversed animals, only Neotrogla evolved the elaborated female penis," says Yoshitaka Kamimura from Keio University in Japan. For that, the researchers will look into studies of behavior, physiology, and more. First on the list, they say, is to establish a healthy population of the insects in the lab.

In sex-reversed cave insects, females have the penises 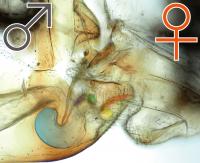