The evolutionary prerequisites of myelin -- the fatty substance that insulates axons and enables rapid communication between cells of the nervous system in jawed vertebrates -- are described in new research in fish published in JNeurosci.

Myelinated axons increases a neuron's transmission speed by as much as 100 times that of an unmyelinated axon. Myelin is not present in jawless vertebrates, which diverged from the jawed vertebrates approximately 560 million years ago.

Taking advantage of recent technical advances in visualization techniques, Wiebke Möbius, Hauke Werner, and colleagues observed the spinal cord and part of the peripheral nervous system in the sea lamprey. Axons of the lamprey lateral line nerve were all surrounded by glial cells, which are responsible for myelination in the jawed vertebrates. These glial cells expressed the equivalent genes expressed by the Schwann cells that myelinate axons of the peripheral nervous system in mammals. Similarly in the spinal cord, the researchers observed glial cells resembling astrocytes. The larger size of axons in adult lamprey compared to the larval stage may enable rapid signal transmission, suggesting that myelin may have evolved to achieve similarly fast neuronal communication in the much smaller axons of jawed vertebrates.

Article: Axonal ensheathment in the nervous system of lamprey: Implications for the evolution of myelinating glia

Glia and axons: A match made in evolution 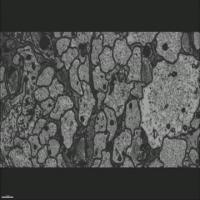