Gravity affects the ecology and evolution of every living organism. In plants, the general response to gravity is well known: their roots respond positively, growing down, into the soil, and their stems respond negatively, growing upward, to reach the sunlight. But how do plants sense gravity and how do they direct or signal their cells to grow in response to it? Although botanists understand a great deal about how this works, a recent article in the recent issue of the American Journal of Botany reviews what we know so far, from mechanical to genetic approaches; it reveals that there are still substantial gaps in our knowledge of the molecular details and highlights new ideas for potential regulating mechanisms.

One of the most constant environmental stimuli that a plant encounters is gravity. Elison Blancaflor, author of the article and a Professor in the Plant Biology Division at the Samuel Roberts Noble Foundation, Oklahoma, is particularly interested in the effects that gravity has on plant development, and especially in its pivotal role in the evolution of a plant's sensory and signaling system.

"Although the process of gravitropism—defined as the downward growth of the plant root so it can explore the soil better for nutrients and water and the upward growth of the plant shoots to maximize light absorption—appears to be a simple plant response that we observe here on earth, the biological processes that control it are rather complex," notes Blancaflor.

Indeed, Blancaflor explains in his review article that gravitropism requires the coordinated activity of different cell and tissue types. In plants, the area where gravity is sensed is often spatially distinct from the area of growth. So how do these two discrete areas communicate with each other and direct the plant to where it should grow?

To date, gravity sensing in plants has been explained by the starch-statolith hypothesis. For example, in roots, gravity-sensing cells at the tip of the root contain dense, starch-filled organelles known as amyloplasts. Amyloplasts settle to the bottom of the cells in response to gravity, which then triggers the hormone auxin to move to another, distinct, area of cells and causes them to elongate and bend toward gravity. However, the molecular details of exactly how the physical movement and settling of amyloplasts in one set of cells triggers the accumulation of auxin in another, physically distant, set of cells in a plant remains a mystery.

The most prevalent current hypothesis is that the cytoskeleton, or cellular scaffolding, plays a major role in this gravity-sensing, intercellular communication; the cytoskeleton is made up of filaments, consisting of the proteins actin or tubulin, that allow movement of materials along strands, such as is seen in meiosis or mitosis. However, there is a major controversy in the field regarding the role of actin in gravitropism primarily due to contradictory outcomes in studies where actin was inhibited—the most interesting ones, according to Blancaflor, being those where actin disruption actually led to enhanced gravitropism.

Blancaflor tackles this controversy by reviewing what we know regarding how amyloplasts work, what affects actin, and how recent genetic studies have discovered that proteins may regulate actin and therefore auxin distribution. For example, recent genetic work using the model plant, Arabidopsis, reveals potential mechanisms as to how the actin cytoskeleton connects the gravity sensing cells to auxin in the growing cells.

Although Blancaflor's review article specifically discusses, based on years of research, how one component of the plant cell, namely the cytoskeleton, controls the process of plant gravitropism, he notes that understanding gravitropism has important implications for agriculture as well.

"Information from basic studies on the cytoskeleton and how plants respond to gravity," he comments, "can inform and provide strategies for genetically engineering crop plants with improved root systems or overall plant architecture."

Blancaflor's interest in gravitropism goes even beyond this earth's atmosphere and into space: "The research I discuss in this article has led me to explore how minimal gravity impacts plant growth and development, and to ask if, like on earth, the actin cytoskeleton also contributes to plant growth in space where gravity is reduced."

Indeed, Blancaflor has conducted research on the Space Shuttle and will have some upcoming experiments on the International Space Station (ISS) this year related to the topic he reviews in this special issue article.

The full article in the link mentioned is available for no charge for 30 days following the date of this summary at http://www.amjbot.org/content/100/1/143.full.pdf+html. After this date, reporters may contact Richard Hund at ajb@botany.org for a copy of the article.

The Botanical Society of America is a non-profit membership society with a mission to promote botany, the field of basic science dealing with the study and inquiry into the form, function, development, diversity, reproduction, evolution, and uses of plants and their interactions within the biosphere. It has published the American Journal of Botany for nearly 100 years. In 2009, the Special Libraries Association named the American Journal of Botany one of the Top 10 Most Influential Journals of the Century in the field of Biology and Medicine. 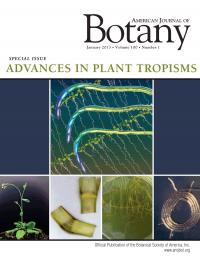