University of Tokyo researchers have demonstrated an electrically-controllable valley current device that may pave the way to ultra-low-power "valleytronics" devices.

On the atomic scale, matter behaves as both a particle and a wave. Electrons, therefore, have an associated wavelength that usually can have many different values. In crystalline systems however, certain wavelengths may be favored. Graphene, for example, has two favored wavelengths known as K and K' (K prime). This means that two electrons in graphene can have the same energy but different wavelengths - or, to put it another way, different "valley."

Electronics use charge to represent information, but when charge flows through a material, some energy is dissipated as heat, a problem for all electronic devices in use today. However, if the same quantity of electrons in a channel flow in opposite directions, no net charge is transferred and no heat is dissipated - but in a normal electronic device this would mean that no information was passed either. A valleytronics device transmitting information using pure valley current, where electrons with the same valley flow in one direction, would not have this limitation, and offers a route to realizing extremely low power devices.

Now, Professor Seigo Tarucha's research group at the Department of Applied Physics at the Graduate School of Engineering has created an electrically controllable valley current device that converts conventional electrical current to valley current, passes it through a long (3.5 micron) channel, then converts the valley current back into charge current that can be detected by a measurable voltage. The research group used a graphene bilayer sandwiched between two insulator layers, with the whole device sandwiched between two conducting layers or 'gates', allowing for the control of valley.

The group transferred valley current over a distance large enough to exclude other possible competing explanations for their results and were able to control the efficiency of valley current conversion over a wide range. The device also operated at temperatures far higher than expected. "We usually measure our devices at temperatures lower than the liquefaction point of Helium (-268.95 C, just 4.2 K above absolute zero) to detect this type of phenomena," says Dr. Yamamoto, a member of the research group. "We were surprised that the signal could be detected even at -203.15 C (70 K). In the future, it may be possible to develop devices that can operate at room temperature."

"Valley current, unlike charge current is non dissipative. This means that no energy is lost during the transfer of information," says Professor Tarucha. He continues, "With power consumption becoming a major issue in modern electronics, valley current based devices open up a new direction for future ultra-low-power consumption computing devices."

This research was conducted in collaboration with the Center for Emergent Matter Science (CEMS) RIKEN and National Institute for Materials Science. 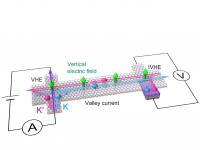 Schematic of the Device Used to Control Valley Current