Warmer-than-average spring temperatures reduce upper Colorado River flows more than previously recognized, according to a new report from a University of Arizona-led team.

Although climate models have suggested that spring temperatures affect stream flow, this study is the first to examine the instrumental historical record to see if a temperature effect could be detected, said lead author Connie Woodhouse, a UA professor of geography and development and of dendrochronology.

"Forecasts of stream flow are largely based on precipitation," Woodhouse said. "What we're seeing since the 1980s is that temperature plays a larger role in stream flow and in exacerbating drought."

The bulk of stream flow in the upper Colorado comes from snowpack. However, temperatures during the "runoff season" of March-July can have a significant impact on the amount of water that ends up in the river, the researchers found. The team studied the records of temperature, cool-season precipitation and stream flow for the years 1906 to 2012.

"In certain years temperature became a very strong influence. It was a bit of a surprise." Woodhouse said. "If we have a warmer spring, we anticipate that the river flows will be less relative to the amount of snowpack."

Woodhouse's co-authors are Gregory Pederson of the U.S. Geological Survey in Bozeman, Montana; Kiyomi Morino of the UA Laboratory of Tree-Ring Research; Stephanie McAfee of the University of Nevada, Reno; and Gregory McCabe of the USGS in Denver. The U.S. Department of the Interior's Southwest Climate Science Center funded the research.

From her previous work with water managers in the region, Woodhouse knows they are interested in how temperature affects stream flow in the Colorado River.

For each year from 1906 to 2012, the U.S. Bureau of Reclamation estimates natural upper Colorado River flow based on data recorded from streamgages at Lees Ferry. At that location, Colorado River streamflow reflects water that has drained from the upper basin, which includes Colorado, Wyoming, Utah and New Mexico.

Using the streamflow data, the researchers identified six droughts that occurred in the Upper Colorado River Basin from 1906 to 2012. A drought was defined by consecutive years with below-average streamflow punctuated by no more than one year of normal or above-average flow.

For average winter precipitation and March - July temperatures for the Upper Colorado River Basin, the research team turned to a database that provides climatological data at very high spatial resolution for locations all over the U.S. The database goes back more than 100 years.

Soil moisture records don't exist very back far into the 20th century. Therefore, the team used a hydrologic model, which is based on modern observations, to generate annual averages for November soil moisture going back to 1906.

The team found November soil moisture had only a small effect on streamflow.

The researchers found that winter precipitation and average runoff-season temperatures varied from drought to drought.

"The 1950s was the driest period, but also the coolest," Woodhouse said. "In contrast, the most recent drought of 2000 to 2012 was the warmest, but only moderately dry."

During and since the 1980s, average Upper Colorado River Basin temperatures during the runoff season have been increasing.

"If we have a warmer spring, we can anticipate that the flows will be less relative to the amount of snowpack," Woodhouse said. "What we're seeing is not just the future - it's actually now. That's not something I say lightly."

For at least the past decade, climate models have indicated that warming temperatures have an increasing effect in modulating streamflow, she said. The team's findings, which are based on real, observed data, mirror the predictions of the climate models.

University of Arizona School of Geography and Development
http://geography.arizona.edu/ 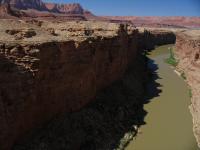