HOUSTON -- (Jan. 28, 2016) -- In a surprising find, physicists from the United States, Germany and China have discovered that nuclear effects help bring about superconductivity in ytterbium dirhodium disilicide (YRS), one of the most-studied materials in a class of quantum critical compounds known as "heavy fermions."

The discovery, which is described in this week's issue of Science, marks the first time that superconductivity has been observed in YRS, a composite material that physicists have studied for more than a decade in an effort to probe the quantum effects believed to underlie high-temperature superconductivity.

"There is already compelling evidence that unconventional superconductivity is linked in both copper-based and iron-based high-temperature superconductors to quantum fluctuations that alter the magnetic order of the materials at 'quantum critical points,' watershed thresholds that mark the transition from one quantum phase to another," Si said. "This work provides the first evidence that similar processes bring about superconductivity in the canonical heavy-fermion system YRS."

Electrons fall within a quantum category called fermions. Heavy fermions are composite materials that contain rare earth elements. Their name stems from the fact that at extremely low temperatures, typically less than 1 kelvin, electrons move through the material as if they were 1,000 times more massive than normal. In the latest experiments, Si said, the measured heat capacity was so large that the electrons behaved as if they were heavier still -- about 1 million times heavier than normal. This occurred as the YRS was cooled to just above the point of superconductivity, around 2 millikelvins.

Si, Rice's Harry C. and Olga K. Wiess Professor of Physics and Astronomy. also directs the Rice Center for Quantum Materials (RCQM). He said the research was conducted in collaboration with RCQM partners in Germany and China. Experiments were performed at the Walther Meissner Institute for Low Temperature Research at the Bavarian Academy of Sciences in Garching, Germany, and at the Max Planck Institute for Chemical Physics of Solids in Dresden, Germany. Theoretical work was performed at Rice and at Renmin University of China in Beijing.

Experiments overseen by the Meissner Institute's Erwin Schuberth and the Max Planck Institute's Frank Steglich offered the first glimpse of YRS' behavior at the quantum critical point. Schuberth, who has appointments at both institutes as well as the Technical University of Munich, said what appeared to be an increase in apparent mass was actually the clue that nuclear forces were at work.

"Nothing else could have accounted for such a large change," he said.

The bulk of experiments were performed in Garching, where Schuberth's team used "adiabatic magnetic cooling" and other specialized techniques to make its YRS samples ultracold, about 10 times colder than those in any previous YRS experiment; this is what allowed the team to discover superconductivity.

In analyzing the evidence, Si and fellow theorist Rong Yu of Renmin University found that the arrangement of inertial spins of the ytterbium nuclei in the YRS composite helped bring about superconductivity. He said the nuclear spins became coupled at extremely low temperatures and arranged in an ordered pattern that exposed the quantum criticality of the electrons.

"In YRS, the spins of electrons are locked in a pattern that varies periodically in space and is the hallmark of an electronic order known as anti-ferromagnetism," Si said. "An ordered arrangement of the nuclear spins acts to suppress the electronic order, and this exposes the electronic quantum criticality, which in turn drives unconventional superconductivity."

The discovery of superconductivity in YRS followed a search lasting more than a decade. Steglich said the previous experiments demonstrate that quantum criticality in YRS brings electrons to the verge of being both localized and itinerant, a condition that was predicted by Si and collaborators in a landmark 2001 theory.

Steglich said, "In previous experiments, an external magnetic field revealed a quantum critical point with a host of truly remarkable electronic properties that had been predicted by theory. But the magnetic field also created a condition that is inhospitable to superconductivity."

The current work succeeded in discovering superconductivity by reaching quantum criticality through the ordering of nuclear spins at ultralow temperatures, without applying an external magnetic field.

"It is remarkable that it takes an act of nuclear spins to produce quantum criticality at zero magnetic field and realize superconductivity," Steglich said.

Si said the new findings are important for the study of both heavy-fermion superconductivity and, more generally, the physics of quantum criticality.

"The work demonstrates that quantum criticality is a robust mechanism for bringing about unconventional superconductivity, not only in high-temperature superconductors, as had previously been shown, but also in heavy-fermion materials that are the canonical example of quantum critical behavior in every other respect," Si said.

The research was supported by the German Research Foundation, the Robert A. Welch Foundation and the National Science Foundation.

CAPTION: Erwin Schuberth (left) and Marc Tippmann with a high-performance cryostat at the Walther Meissner Institute in Garching, Germany.

CAPTION: This microscopic closeup shows a small sample of ytterbium dirhodium disilicide, one of the most-studied "heavy fermion" composites. The scale bar in the center of the screen is one millimeter wide.

Heavy fermions get nuclear boost on way to superconductivity 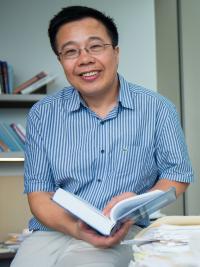