Despite widespread infection, some frog populations are surviving a deadly disease that is the equivalent of mankind's Ebola virus. The reason --genetic diversity.

That's the finding of a new study published this week in the journal Immunogenetics. Anna Savage, an assistant professor of biology at the University of Central Florida, is the lead author of the study.

The research is important because frogs are facing what may be a mass extinction as a result of disease, Savage says.

However, protecting frog habitats from destruction and pollution is critical, she says.

"Don't destroy habitats, maintain large population sizes -- these simple things are the best actions to implement, given whatever limited information we have, to give populations the chance to rebound," she says.

The virus Savage and her colleagues studied is called Ranavirus. It affects cold-blooded animals, such as amphibians, reptiles and fish. It causes a tadpole's internal organs to fill with blood and explode, much like the Ebola virus does in humans. It is one of the top two pathogens causing worldwide amphibian decline.

Researchers suspect that Ranavirus and other similar pathogens have long been in the environment, but they are exploring why the pathogens are now causing so many disease outbreaks.

"Certainly, the rise of these infectious pathogens coincides with the period when global temperatures started to significantly increase," she says. "There are a lot of biologists working on studies trying to tease apart the relationship between climate and amphibian health and how that might translate to some of these global disease problems."

It is important to study frogs because of the roles they play, Savage says. They help control diseases by eating insects that can infect humans and also are an essential part of the food chain.

"If we lost them, there would be this major energetic crisis where we wouldn't have a food source for many other animals that depend on them to survive," Savage says.

In the study, researchers collected tail clippings from tadpoles in 17 randomly selected ponds in Patuxent Research Refuge in Maryland over the course of two years. Tail clipping is a minimally invasive and nonlethal method for tissue collection. The clippings were used to analyze and determine the presence and severity of Ranavirus in the tadpoles. The team also checked for major histocompatibility complex (MHC) genes, which can help a tadpole's immune system fight off disease.

They found Ranavirus infection in 26 percent of the 381 tadpoles they sampled and that the presence of a particular combination of MHC genes was associated with decreased severity of the virus.

"There was evidence that this combination of immune genes was helping those individuals limit how bad the viral infection can get," she says. "To our knowledge this is the first study that shows that this group of immune genes is actually important for Ranavirus susceptibility."

The findings could have implications for frog species in Florida, as Ranavirus is a disease that threatens frogs in the state, including the American bullfrog, the southern leopard frog and the endangered Gopher frog.

"These immune genes aren't completely different across different species," she says. "We actually see a lot of the same variants shared at the level of the entire genus or even the whole family. So, some of the work we've done is showing that we're finding the same genetic variants in wood frogs as in other frogs, including species in Florida."

Savage's lab studies disease genomics in amphibians and reptiles, and she is a member of UCF's Genomics and Bioinformatics Cluster. She received her doctorate in ecology and evolutionary biology from Cornell University. She joined UCF in 2015.

The study was funded by an Association of Zoos and Aquariums Conservation Grant Fund award and the U.S. Geological Survey Amphibian Research and Monitoring Initiative.

Founded in 1963 with a commitment to expanding opportunity and demanding excellence, the University of Central Florida develops the talent needed to advance the prosperity and welfare of our society. With more than 68,000 students, UCF is one of the nation's largest universities, offering more than 220 degree programs at its main campus in Orlando and more than a dozen other locations in Central Florida and online. For more information, visit ucf.edu. 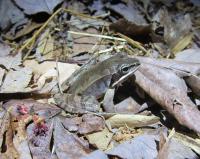 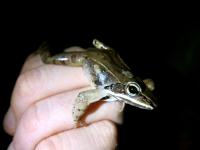