University of Chicago physicists working in the nascent field of experimental vortex dynamics have, with unexpected help from a Sharpie marker, achieved the first measurements of an elusive but fundamental property of fluid flow.

Until now, there had been no way in the laboratory to measure the total helicity, or the measure of when two vortex rings intertwine. In their experiments, the UChicago team created thin-core vortices--the kinds found in aircraft wakes and insect flight--by producing hydrofoils using a 3-D printer.

As luck would have it, the red Sharpie marker used to label the hydrofoils contained rhodamine dye, which fluoresced when illuminated by laser light. When the hydrofoils were placed in a water tank, the dye began to diffuse, and when the hydrofoil was accelerated, the dye got sucked into the core of the newly created vortex--a process recorded via high-speed laser scanning tomography.

The new findings, published Aug. 3 in Science, are the first to show that helicity maintains a constant value during the flow of viscous fluids. Vortex dynamics have important applications in everyday life; meteorologists, for example, view helicity as a factor that contributes to the formation of supercell tornadoes.

"The fact that we have some measurements for the first time that show helicity can be preserved, especially in the presence of stretching, can translate directly to those efforts," said William Irvine, an associate professor in physics, who published the findings along with four co-authors.

In their latest research, the physicists studied three related forms of helicity: twisting, linking and writhing. The three forms are simply different ways to describe geometrically related forms that have been twisted or stretched. Each vortex tube can be visualized as a bundle of filaments, similar to those bound together in a twisted rope.

"If you take a piece of rope or or a telephone cord and you coil it up, then we would say that the center of this rope or telephone cord is writhing," Irvine said. "And if we then took this thing that we coiled up and we pulled it straight, you would see twisting along its length."

Simulating helicity in those flows has been difficult because of the widely separated yet interconnecting scales in which they operate. Previous work had been largely theoretical and involved hypothetical, simpler fluids totally lacking in viscosity. Calculations showed that helicity was conserved in these hypothetical fluids, but viscosity emerged as a significant factor in the flow of actual fluids.

"One of the core problems is that you need to sample or measure features of the flow that exist on very different length scales," said Martin Scheeler, the study's lead author, who recently completed his doctorate in physics at UChicago. The scales range from the diameter of a vortex (approximately 30 centimeters or one foot) to the diameter of its thin core (approximately one milllimeter or three hundredths of an inch).

"You need to measure the flow inside the core as well as the overall shape evolution of that vortex," Irvine said. "That's quite a separation." He characterized Scheeler's work in overcoming the experimental challenges-- simultaneously tracking the fine details of the flow while still measuring the critical larger-scale dynamics--as "a tour de force."

'It's the wackier stuff that works'

Irvine's group had previously used bubbles to conduct pioneering research on the dynamics of vortices in their water-tank experiments. The helicity measurements, however, required something different, which was provided serendipitously through the Sharpie.

Dye has long been used in vortex experiments, but less precisely. In previous experiments, the dye was placed diffusely in the tank, and then the vortices would envelope them. But the Sharpie presented an opportunity to precisely position the dye at the center of the vortices, as Scheeler painstakingly painted dots onto the entire length of the hydrofoils.

"We hadn't really realized that that was a possibility until we saw dye bleeding off the hydrofoil," said Scheeler, who valued the creativity and freedom involved in designing experiments for a nascent field of physics.

"There really is no playbook, and that's really exciting," he said. "You get to try out all sorts of different things, and sometimes it's the wackier stuff that works." 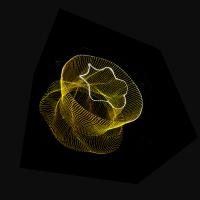