Before the worst mass extinction of life in Earth’s history – 252 million years ago – ocean life was diverse and clam-like organisms called brachiopods dominated. After the calamity, when little else existed, a different kind of clam-like organism, called a bivalve, took over.

A lot, says UWM paleoecologist Margaret Fraiser. Her research into this particular issue not only answers the question; it also supports a relatively new theory for the cause of the massive extinctions that occurred as the Permian period ended and the Triassic period began: toxic oceans created by too much atmospheric carbon dioxide (C02).

The theory is important because it could help scientists predict what would happen in the oceans during a modern “C02 event.” And it could give them an idea of what recovery time would be.

Studying the recovering ecology is equally significant, says Fraiser. The evolution of surviving species in the aftermath of the mass extinction set the stage for dinosaurs to evolve later in the Triassic.

From air to water Fossil records suggest that trauma in the oceans actually began in the air.

“Estimates of the C02 in the atmosphere then were between six and 10 times greater than they are today,” says Fraiser, an assistant professor of geosciences. It makes sense, she says. The largest continuous volcanic eruption on Earth – known as the “Siberian Traps” – had been pumping out C02 for about a million years prior to the Permian-Triassic mass extinction.

The Permian-Triassic extinction wiped out 70 percent of life on land and close to 95 percent in the ocean – nearly everything except for bivalves and a fewer number of gastropods (snails).

C02 is a greenhouse gas that influences global temperatures. But, says Fraiser, according to the fossil record, high levels of C02 and the correspondingly low levels of oxygen do much more than that.

The hypothesis unfolds like this: High C02 levels would have increased temperatures, resulting in global warming on a large scale. With no cold water at the poles, ocean circulation would have stagnated. The oceans would have become low in oxygen, killing off life in deeper waters where there was no opportunity for water to mix with the little oxygen in the atmosphere.

More carbon dioxide would have been created as life forms died and microbes broke them down, which also would have created poisonous hydrogen sulfide. The oceans would have become an inhabitable chemical cocktail.

Follow the CO2 In fact, there have been many CO2 events in geologic time, and they’ve literally left their mark.

“You can see where the rock turned dark,” says Fraiser, pointing out different-colored layers in a fossil samples from the period. “That is an indicator of low oxygen at the time. These are from sites that were underwater at the beginning of the Triassic period.”

Fraiser, who has just finished her first year at UWM, is one of several new faculty in geosciences and its emerging paleobiology program.

She has collected fossil samples of the marine survivors from the period in what today are China, Japan, Italy and the western United States. The similarities of the fossils from all these locations have been surprising.

“It is unexpected to see that,” says Fraiser. “It appears that these bivalves and gastropods were the only survivors worldwide.”

They had all the right characteristics to tolerate the lack of oxygen, she says. They were tiny, shallow-water dwellers, with a high metabolism and flat shape that allowed them to spread out to extract more of the limited oxygen when feeding.

Toxic conditions also inhibited marine life from producing a shell. Size suddenly mattered for mollusks, and only the very small survived, eroding the balance of the marine food chain.

Ultra-slow rebound As she sorts through the rock record from just after the Permian-Triassic extinction, Fraiser also has unearthed evidence that explains why it took so long for life to recover. The answer appears to be more of the same: C02 levels remained high long after the initial die-off.

“After other extinction events on Earth, life bounced back within 100,000 to a million years,” she says. “But with the Permian-Triassic extinction, we don’t see a recovery for 5 million years. There is very low ecological complexity and diversity for all of that time.”

Another intriguing aspect of this interval in Earth’s history, says Fraiser, is that, according to the rock record from the Triassic, it was bounded by two C02 events.

The first was the disappearance of coral reefs. “That gap sounded the alarm,” she says. “That’s what indicated that C02 levels were elevated.”

On the back end, large communities of bivalves prevailed in such large numbers that they formed their own reefs.

“The Earth’s system doesn’t care where the C02 comes from,” Isbell says. “It’s going to respond the same way.”

When bivalves ruled the world 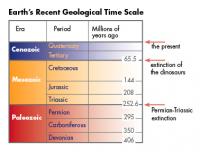