During the first ever landing of a probe on a comet, the world held its breath as Philae survived a bouncy landing on comet 67P/Churyumov-Gerasimenko on November 12, 2014. This special issue of Science highlights seven new studies that delve further into the data that has been transmitted back by Philae. In a detailed account, Jens Biele et al. describe the critical moments where Philae descends on 67P, only to bounce off the soft, intended landing area and finally settle on a harder surface farther away. Analysis of the different compressive strengths of the two surfaces, based on the bouncing trajectory, sheds more light on the evolution of comets and could improve the design of future comet missions. Previously, scientists trying to understand comet surface material strength had to rely on indirect observations, which have ranged widely, and include some very low values that have raised questions about whether a comet could successfully dock on such weak material. After analyzing the depth profile of the lander footprint features with imaging tools, Biele and colleagues believe that the Philae's feet first came in contact with a soft granular surface, which was approximately 0.25 meters (0.82 feet) thick, with a harder layer below. This layering creates a compressive strength of about 1 kilopascal, whereas the compression strength of Philae's final, much harder landing site exceeded 2 megapascals (2,000 kilopascals), possibly contributing to why only one leg was able to anchor to this latter surface, and partially at that.

In a research article by Wlodek Kofman et al., the team found the composition of the head of the comet to be fairly homogenous. To get a better idea of 67P's interior, the team directed electromagnetic signals through the nucleus of the comet to Rosetta on the opposite side. The signals Rosetta received lacked a scattering pattern, indicating that the interior of the comet is uniform throughout. The team used these electromagnetic measurements, which analyze the permittivity (resistance of the electrical field), to further determine that 67P has dust/ice ratio of 0.4 to 2.6 and a very high porosity of 75 to 85%. Research by Fred Goesmann and colleagues further analyzes the composition of 67P using the COmetary SAmpling and Composition (COSAC) instrument, designed to identify organic compounds in the comet and thus contribute to a deeper understanding of the history of life on Earth (some scientists think comets delivered to Earth materials that were important for its chemical and biological evolution). The device collected molecules from 10 kilometers (6.2 miles) above the comet surface, after the initial touchdown, and at the final resting site. This process detected 16 organic compounds, four of which - methyl isocyanate, acetone, propionaldehyde, and acetamide - were previously unknown to exist on comets. In a related study, Ian Wright et al. also analyzed organic compounds on 67P but used Ptolemy, an instrument that measures stable isotope ratios. Their measurements indicate the presence of a radiation-induced polymer on the surface of the comet. Ptolemy measurements also indicate an absence of aromatic compounds, such as benzene, on the comet.

In a study by Jean-Pierre Bibring and colleagues, the surface of 67P is analyzed in panoramic images taken by a set of seven cameras as part of the Comet Infrared and Visible Analyser (CIVA). The collection of images, taken just after Philae's initial bounce and final touchdown, reveal a fractured surface with a variety of grain scales and reflective rock structures, offering unprecedented insights into this type of primitive space matter. As Philae approached 67P, far-field sequence and the near-field sequence images revealed a clearer picture of the comet's geography; an analysis of Rosetta Lander Imaging System (ROLIS) descent images by Stefano Mottola et al. suggests that 67P's landscape is shaped by erosion. Boulders jutting out of granular areas are surrounded by depressions that are reminiscent of the wind tails observed on Earth, the result of wind erosion and deposition. The authors speculate that some of the erosion occurs from "splashing", the ejection of one or more soil particles by the impact of an incoming projectile, which they confirmed using models. Finally, to determine 67P's thermal and mechanical properties, Tilman Spohn and colleagues analyzed data from Multi Purpose Sensors for Surface and Subsurface Science (MUPUS) thermal and penetrating sensors on board Philae. Due to the lander's unintentional final resting spot, the sensors were unable to penetrate the hard surface to attain subsurface temperature readings; however, the data reveals that 67P's daytime surface temperature varies between 90 and 130 Kelvin. By analyzing thermal inertia and soil composition, the team found that the surface at the final landing spot is covered with a highly compact, microporous, dust-ice layer with a porosity of 30 to 65%. Collectively, the unique data that Philae has sent back brings us closer than ever before to understanding the nature of comets.

News Story from Science: A related news article by Eric Hand will be available on Wednesday, 29 July. 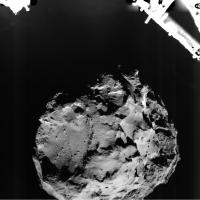